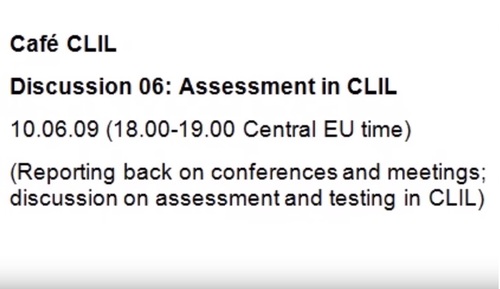 You can hear a full recording of the discussion at this YouTube link.

New visitors to Café CLIL:Adrian Tennant is a teacher, trainer and writer who writes 'soft CLIL' materials for onestopclil.com. Adrian does many things, so many that it's impossible to list them all here, so I won't try. What you can do is take a look at his author bio at Macmillan's website in order to find our more about him. http://www.macmillandictionaries.com/authors/adriantennant.htm It's great to have him join us.(adrian.tennant@ntlworld.com)

Summary of discussion points:
What about weak language learners?
Adrian asked is language an obstacle for students who know the content but don't know enough English for expressing their understanding of the content.
Lyubov said that it is sometimes an issue for some students but that these students do get extra help and she said that there is an element of parent choice in that the school is well known as a language school, so they know what they are getting their children into.
Sabine said that both languages are accepted in her context in Germany.
In some cases language is an issue for students in that they may know the content but can't express it in English. Here, the approaches are to offer extra help, and also to accept L1 answers.
What about students having the option to switch between languages when they get stuck in the L2? This was found to be an option in Austria.
Sabine agreed that this was acceptable in Germany.

Language or content, or both?
Peach described the case in Switzerland where the tasks are driven by the language and that there is a growing feeling that the content should also be tested.
Their is a growing feeling that in language CLIL classes content should be assessed.
In Switzerland language teachers are encouraged to assess content, but not grade it.
Lauretta - describes situation in Italy where subject teacher and language teacher both assess and give both a subject grade and a language grade for the achievement of the student.
Peach suggests that CLIL should be seen as an opportunity for collaboration between teachers of subjects and languages and CLIL assessment is one clear area where they could both play a role.
Adrian raises the issue again of what happens with the student who is weak in the language but knows the content. The opportunity to do the test in L1 is an option, but where content is needed in L1 for this purpose this may mean that the content is covered twice.
Sabine describes 'work stations' in her context where the students are working in small groups, and the language teacher is free to work with a certain group on language issues, and the content teacher on content issues.

What is the role of L1?
Lyubov stresses that the focus for her is and should be the content and that with her essentially monolingual groups there is a role for the L1 in learning.
Lauretta supports the idea of L1 use and code switching where possible and effective, but that this may not be possible in international classrooms where there are many languages.
((Keith's note - you might like to follow up this link to the Brazilian Bilingual Conference where the focus was multilingualism not monolingual view of bilingualism which is relevant here))
Peach describes central Swiss context where there are hardly any monolingual classes now. From one quarter to one third of students are from migrant families.

Time is an issue
Adrian raises the issue that more time is needed.
Lyubov supports this.

There is also an issue of teacher awareness
Adrian gives personal example of daughter moving to the UK and not coming from an EL context, and there being a lack of awareness among teachers about what to do with his daughter in the UK, bright but still needing language help.
Peach described the same situation with his children studying in the UK.
Keith - EAL CPD is getting better in the UK if literature and information available is anything to go by.
((Keith's note - you might be interested in looking at the eal-bilingual mailing list to find out what colleagues are talking about concerning children moving to live in the UK and needing language help in the content curriculum
eal-bilingual@lists.becta.org.uk
http://lists.becta.org.uk/mailman/listinfo/eal-bilingual))
Lyubov certain areas of language are particularly difficult in assessment such as 'instruction' language / command terms.

Can we differentiate in content assessment according to language level?
Keith asks is it actually possible to produce an exam which is differentiated on linguistic levels, which is differentiated in order to make the content more accessible to lower level language learners?
Lyubov mentions use of drawings in tests rather than writing in a lab report for example.
Sabine - texts may lead to misunderstanding, suggests to send to Keith samples of visual tests.
___
This is a good point to invite all readers to send us their test materials to post here, especially if you feel that they deal with language in a way which respects learner levels, if there is any attention to differentiation in terms of language.
It was a very interesting discussion and one which I think we'll come back to again, and again.

Below you will find all the information, documents and links which were provided here prior to discussion in order to feed in and help guide us while debating.It might be useful to think about two areas:
1) ongoing assessment
2) testing
I've just fielded a discussion for the IATEFL Young Learners and Teenagers group where there was a lot of feeling that a) teaching and testing a subject in a foreign language carries risk of unfairness where there isn't respect paid to language, and b) there isn't enough if any CLIL literature on how this testing can be done with respect paid to differences in language level.
My own feeling is that CLIL may need to have a wide collection of ongoing assessment materials and instrument so that the information about learner level and achievement can feed back into teaching. I also think that it's difficult, if not impossible, to respect difference in language level to any meaningful and fair way with testing materials. So, if you have any of the two, please do send them along, talk about them when we meet, and any other areas you feel relevant.

I've worked with a lot of colleagues in this area, and am posting two instruments they have shared with me, just for you information.  They serve only as examples of attempts at creating CLIL assessment instruments: CLIL 1 - CEF model, CLIL 2 - integrated descriptor model. I've zipped them together to save space into the folder called 'Assessment instruments'.

John Clegg provided a summary of risks in CLIL assessment: 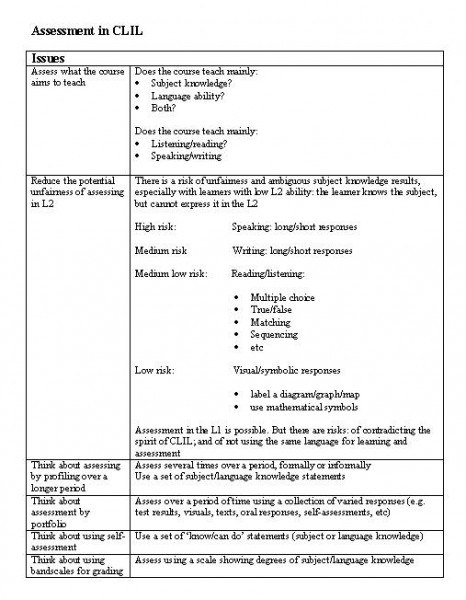 Also, Take a look at Geri Smyth: Helping Bilingual Pupils to Access the Curriculum, Fulton, 2003
Language is mapped onto the curriculum ... 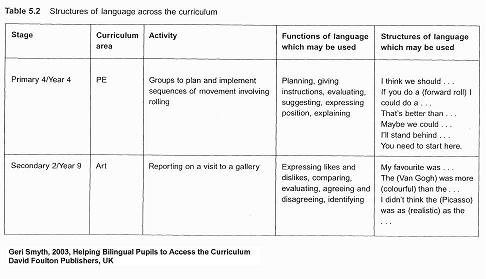 I also received a test 'pack' from a colleague in Italy on the theme of water which I'm including here. Again, it is only intended to offer examples to our discussion. We are talking about a CLIL module on water, class 1 Middle School, Ss age 10/11
The relevant papers given here are zipped into a folder below called: 'Italy example'.

Most of the activities in class are made in cooperative learning, pair work and group work, the assessment as well but only in the preparatory phase then they are able to face individual tests.

I'm also uploading here two other examples. The first one is a multiple choice test for Physics. It's offered simply as an example of how tests can feed into language development as here we have possible models of (linguistically) correct statements. The document is attached below and is called: 'multichoice_model'.
The other sample I wanted to share is this PPT which takes Maths test materials and attempts to analyse them from the point of view of linguistic challenge. My point with this is that attention to 'risk' as I've called it here is minimal in mother tongue test instruments and perhaps there is a job to do for exams service providers to ensure materials carry minimum linguistic risk for the FL test candidates among their customers. The PPT is attached below and is called: 'maths_exams_what_they_test'.

Send us your test instruments, sample tests, if you have any, and I'll upload them here.