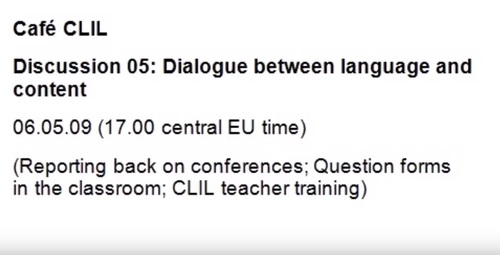 (Reporting back on conferences; Question forms in the classroom; CLIL teacher training)

You can listen to the entire recording of our discussion at this YouTube link.

We were joined by two new colleagues to Café CLIL. Introductory text from colleagues new to the discussion follows here as well as a contact email.

New visitors to Café CLIL:
Sabine Sauerwein is working as teacher for Biology and Religion in a secondary School in Wiesbaden / Hessen / Germany. She is working with Prof. Dr. Wodzinski in a pilot-scheme to encourage women in science and technology at the University Kassel. She is co-operation partner from the ADALOVELACE - Project (encouragement for women in sciences) at the University Mainz. She is also co-operation partner at the University Kassel CINSaT (Center for Interdisciplinary Nanostructure Science and Technology), that project is supporting young men and woman. She is a member of the MNU (mathematical – natural scientific– education) and is working with teachers as instructor. At the education authority in Wiesbaden she is Set- Coordinator and works with teachers as instructor for SiNUS Science.
She is interested in school biology-projects by teaching pupils in English language because most of the original literature is written in English. Therefore pupils will need this during their study and later at work. She heard from the CLIL (content and language integrated learning) and is interested getting involved in that project. The globalization of markets fits to Sabines Slogan: “bring people closer together!” (sabine.sauerwein@web.de)
Cristiana Ziraldo: I am a teacher of English in a secondary school and I am a teacher trainer at university (I teach future teachers of English). I have a degree in foreign languages (English and German) and a MA of arts (University of Guelph, Canada). I have been responsible for the CLIL project in my school for more than five years (a liceo).  Before then, I was responsible for the CLIL project in the former school I used to teach at (a vocational school). My present school is “scuola polo” which means so to say head school of all other schools linked to CLIL in my province (Pordenone, which is near Udine, where you came!).  My school is the scuola polo (headquarters of CLIL in Friuli Venezia Giulia) because one of my colleagues (a teacher of English too), is the head of CLIL in our region. (clauchi@libero.it)


There were two documents uploaded prior to the discussion, both from John Clegg and both of relevance to the discussion point to do with question forms: Language for classroom management; Supportive teacher talk.

Reports on events attended
IATEFL Cardiff CLIL Panel
David Graddol while initially sceptical on CLIL, is now positive and suggests that parents need support also. Graddol stressed the need for time not dictated by a political cycle or agenda. Hugo Baetens-Beardsmore stated that 'perfect CLIL like perfect monolinguals doesn't exist'. There was agreement that the role of language teacher will change. http://iatefl.britishcouncil.org
YLST SIG fielded discussion
We got stuck on assessment and there were very few subject teachers in the discussion. The write-up of the discussion will be published on onestopclil next month. http://groups.yahoo.com/group/younglearners/ www.onestopclil.com
Tri-CLIL Barcelona
There was a significant group of subject teachers at the event and there was and is a growing focus on the subject teachers in terms of their importance in CLIL.
CLIL across Contexts: A scaffolding framework for CLIL teacher education
This was a socrates / comenius project meeting offering a model for teacher education. Here assessment is high on the agenda (relationship between subject knowledge and language ability). The suggestions are an interaction between language and content similar ideas to those in John Clegg's documents uploaded to Cafe CLIL. Other key ideas were multimodal teaching and supporting language. The final report on definitive materials is expected in September. http://clil.uni.lu/

Discussion points
Question forms in the classroom
Lauretta gave us the idea for discussing questions initially, as she believes that how questions are used affects the way you run a lesson.  It affects newly trained teachers and how they run a lesson. Display questions are the most common, and the question is asked if CLIL is to be as interactive, communicative and inclusive do we need to change the questions we use in the classroom to give more opportunities to learners?
Christiane Dalton-Puffer 'Discourse in Content and Language Integrated Learning (CLIL) Classrooms' surveys over 500 minutes of classroom time and one of the conclusions is that display questions make up over 90% of all questions.
Peach describes his training context which stresses community language teaching, and discourages display Qs, tries to encourage more genuine, more real questions, as more real Qs  shows more interest in the pupil. We may need to operate more with concept questions rather definitions, more real questions.
Keith raises the point that there may be a need for more 'modelling' of structures through other forms than questions, or at least using questions which represent structures which occur in output language. Peach stresses here that CLIL in this very way delivers immediate reward, immediate achievement.
Lauretta then stresses that we may need to develop a more task-based approach generally, enrich the lesson with a mixture of different of activities
Sabine in her Science and Religious Studies classes gets students to carry out projects and then feedback, take the focus away from the teacher and give it to the students.
Training teachers and questions
Peach emphasizes that questions are dealt with on a purely abstract level with trainees in his courses, but that during observations he makes notes and is then able to make reference to concrete examples. In this way there is a look at question forms in practice and then reference to that back in training in theoretical sessions.
Keith suggests that one way ahead may be to produce scripts, lists of questions followed by subject-related language in the same way John Clegg lays out in his documents on classroom language (link). We may need something more detailed and expanded for specific subjects.
Lauretta stresses that the CLIL teacher is not a new type of teacher but it is one which integrates many skills and class management and questions is one of them as it is for other teachers.