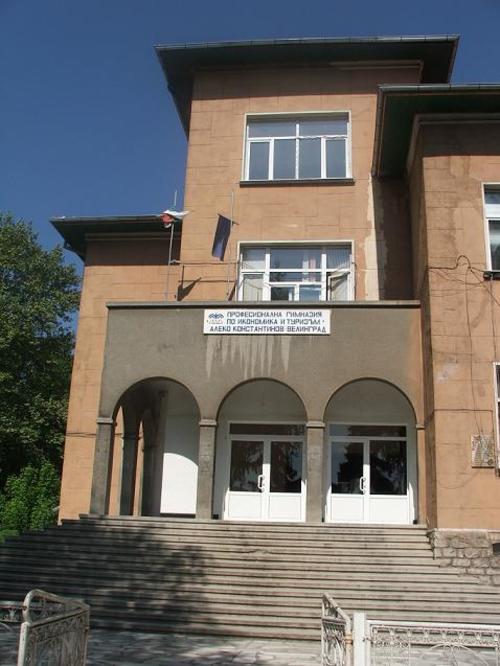 Bulgaria - School for Tourism and Economics

Lesson on Tertiary Economy, Tourism and Development
Velingrad, 21st May, 2009

I had an invitation recently to give a Geography lesson in the Technical School for Tourism and Economics in the Bulgarian Rhodope mountain Spa town of Velingrad.

The school was interested in offering an open lesson to its teachers and others a focus lesson with innovative communicative ideas based on the content curriculum they teach. I decided to give a lesson on the Pros and Cons of tourism. Given the growth of tourism in the town in recent years, this seemed to be an appropriate topic. 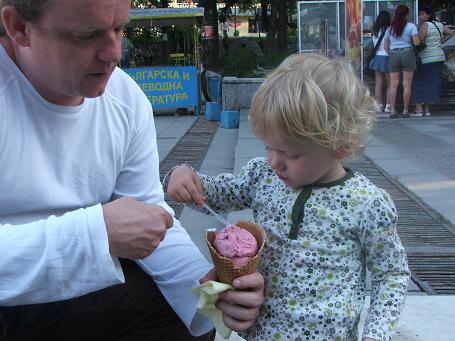 Krastina and Dara came with me as we’d decided to make an excursion of it and stay for the weekend. It was a good decision. Dara loved the water.
I arrived at the school in the early afternoon and as Elena, my school contact, organized the media – we had the local TV station and the local press – as well as a large number of teachers from the school to observe. 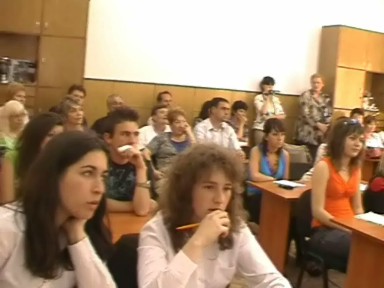 As we were a little bit early, I got the students, aged 15-17, to tell me their names which I drew on a map of the classroom to help me refer to them by name during the course of the lesson. I can still remember there were Yanko, Yordanka, Georgi, Seeka (thanks for lending me your watch!), Eva, Alex and others. 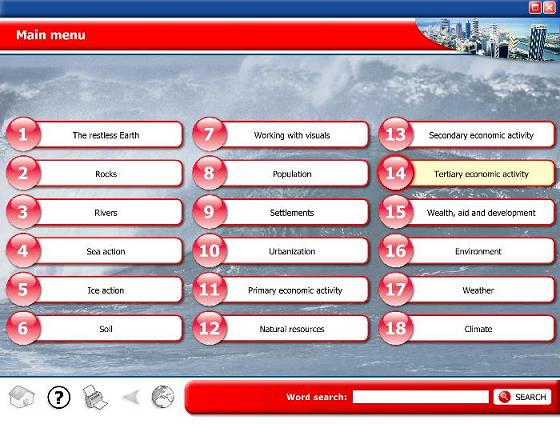 Elena had specifically asked me to try to include some interactive multi-media in the lesson and referred to the Geography VPS CD, so I used that .... 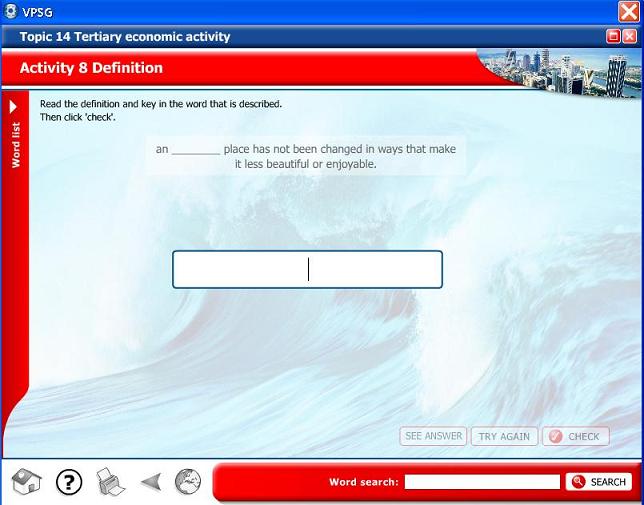 I used it to warm up the students' background knowledge and vocabulary of the topic. 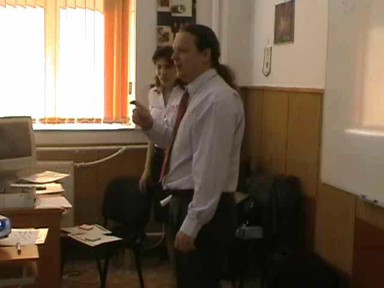 The school itself is an interesting place with a special role in the education of local young people. It is special because the Spa town of Velingrad is officially the Spa Capital of Bulgaria. The school teaches a number of specialized areas such as waitering, front desk hotel management, kitchen staffing, among many others. 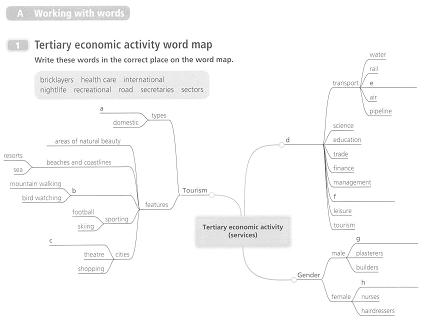 I wanted to use activities that would make the students talk and talk they did! Bravo to all the students who took part!
We did a vocabulary activity where they had to guess which terms I described in teams, correct guesses getting a point.
The vocabulary sheet is here below for download. 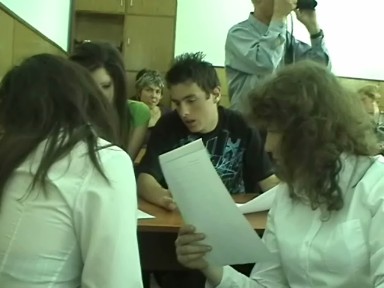 I was given a short tour of some of the classrooms and found that the school had a fully equipped commercial kitchen, a bar-restaurant, and a caffeteria which are used to train the students in a variety of skills. 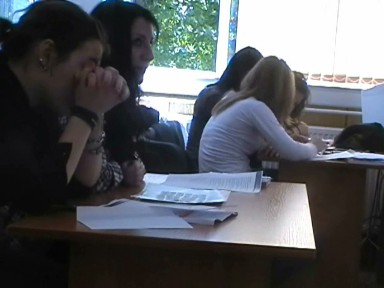 I got the students to carry out a read and sort task from the VPS  Geography book which related tourism to development in Mallorca. 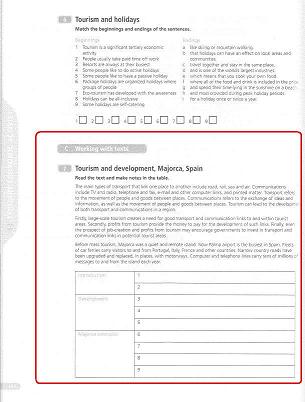 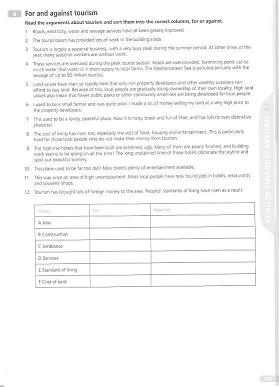 We also did a task from the same book on arguments for and against tourism. Instead of doing the task as a simple reading though, I asked the students in groups to sort the text into a table which I prepared. This way they had to discuss the arguments  in their groups before sorting them.
The teachers who organised my visit were particularly interested in investigating the possibility of offering more of the curriculum through English.  At the moment the content teachers don’t have the language ability to offer their subjects through English and so the idea is that the language teachers work alonside the subject teachers in offering an ESP-type provision. There is clearly a lot of scope for this approach in this school. 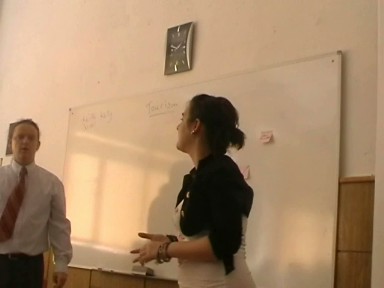 The students had to discuss pros and cons of tourism for development in the form of a post-its debate. 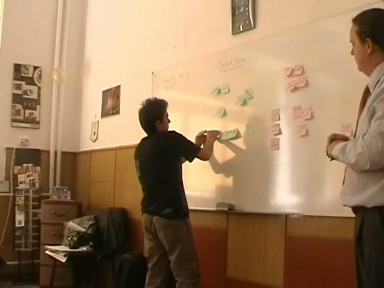 Arguments for and against
In the end the board had clusters of statements which can then be generalized into arguments both for and against the theme or topic in question - here tourism and development. This is a relevant theme in Bulgaria where development has been a little out of control in the tourist areas around the country.
I also gave the students a handout with 'The language of arguing' (document attached below). We didn't do anything with this in class, but I thought it would be useful in case any of the students actually took me up on my 'homework invitation'. I invited students that if they wanted, they could write a discursive essay on this topic 'Is development through tourism a good or a bad thing?' 450 words and I gave them my email. If they write it and send it in I'll check, mark and send it back.
I’ve also promised to see what I can do to help the school develop links with other schools with a similar profile in other countries. It makes sense for the school to seek out similar schools to share ideas and practice as there is a lot of good practice in education in hospitality services in a number of European countries.
We also talked about resources. It’s a simple problem. The school doesn’t have English-medium materials for hospitality services education. I said I’d try and find out what’s available. It may be that colleagues in other countries. 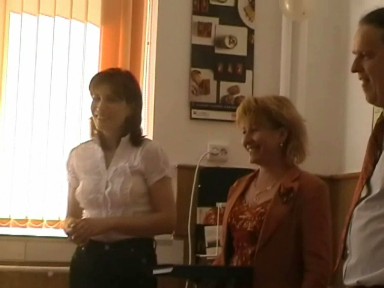 Thanks and good-byes after the lesson.
The lesson:

We showed students a sample from the Macmillan Geography VPS CD for Topic 14 activity 2. One of the nice aspects of this task is the possibility to be able to draw up a glossary for the topic, hear a pronunciation of the word and see a simple definition.

6 multiple choice questions, students do in pairs, hand their answer to another pair, we mark together

Team word race
Teacher gives definitions on words seen on screen, team 1 guesses which words, gets one point per correct word, then team 2, until all words have been guessed, points counted 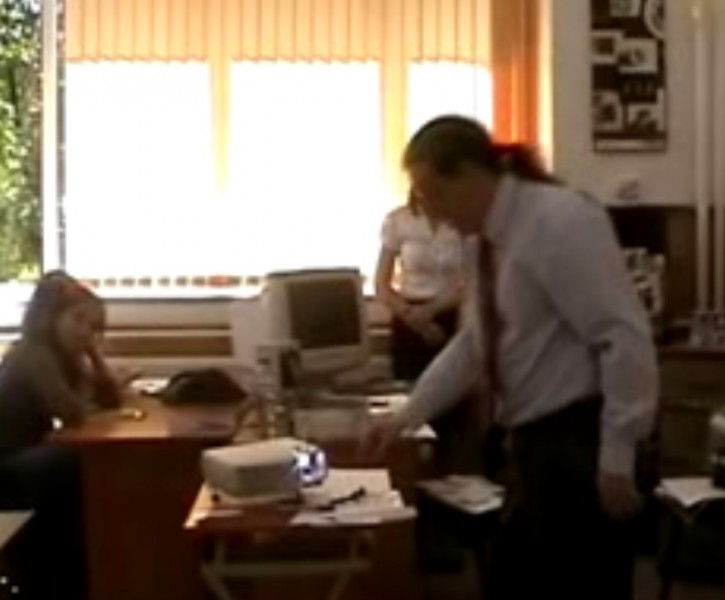 3 For and against tourism

The text for this task comes from the Macmillan Geography VPS topic on Tertiary Economy. Instead of using the text as a linear reading task I decided to prepare it as a group reading and sorting task.  Here the students worked in pairs, threes or fours to rearrange the text into the correct order in a table of arguments for and against tourism. After the students had finished we went through their answers where individuals read their solutions talking both for and against a certain aspect of tourism. 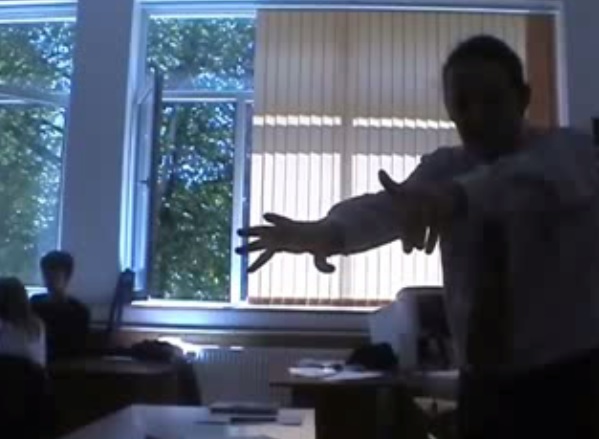 a short clip from this task

5 discuss writing this into a discursive essay, using the language of arguing

The students did a grand job. One of the teachers came up afterwards and said that they hadn’t spoken so much in the whole of the year. I was a little bit worried that they would be overwhelmed by all the adults, the camera and the press in the room, but they got into the lesson and did a great job. There were many other memorable aspects of the trip for me: My daughter shouting ‘pluva’ in the pool of the hotel when she wanted us to help her ‘swim’ in the water; the circus we visited and Dara dancing at the ringside; the school invited us back for banitsa the next day and they make their own fresh cheese pastry everyday so that was special too.

I’m sure we’ll be back and we’ll hear from this school again. I think I'd go back just for the banitsa!