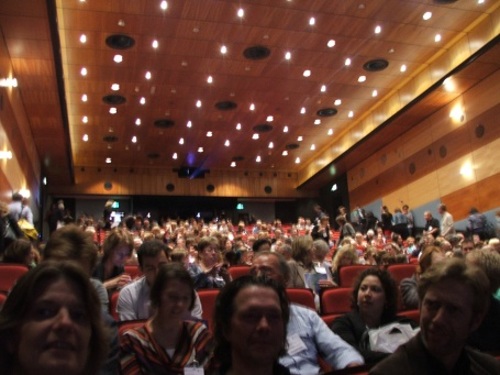 I've been talking about subject-specific language for the last year (2010-2011), since the publication of the Macmillan VPS Science and Geography books, which were all about learning vocabulary. I've since started investigating and writing about general academic language for the Your CLIL section of Macmillan's onestopenglish site, and it was this topic which was the focus of my keynote to the 600 TTO bilingual teachers congregated at the wonderland De Reehorst conference centre at Ede, Holland. 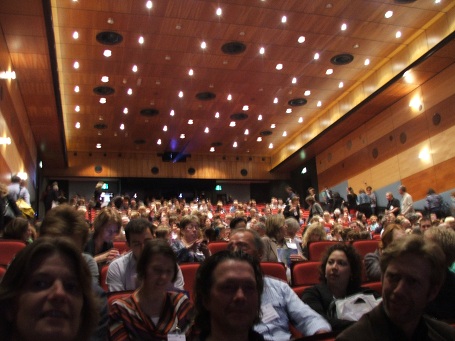 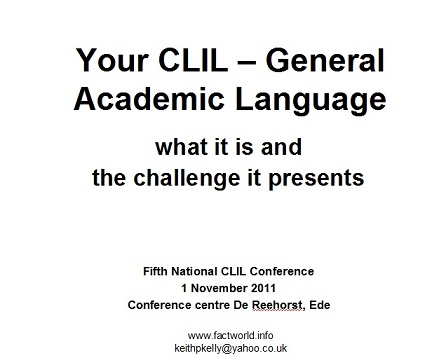 The organizers really did put on a show, with the nifty theme of 'CLIL's got talent' running through the plenary sessions and with the audience enjoying the performances of numerous TTO school students along the way. 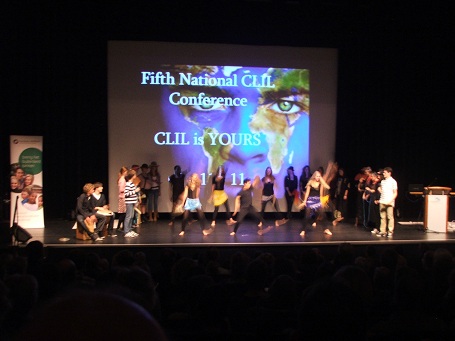 TTO talented students singing and dancing it up 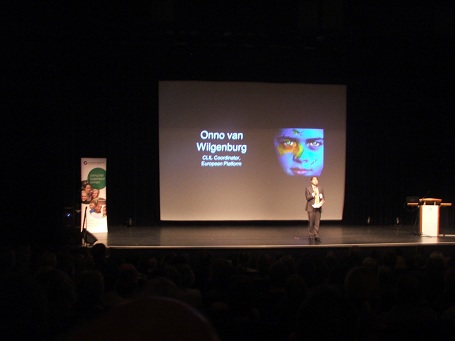 I'd like to thank Onno for inviting me, and Macmillan for sponsoring my participation. I think I not only got to talk about my latest project, but I also found out a lot about the TTO institution, famous for its bilingual education.

It's indicative that the conference was a sell-out, that it attracted over 600 teachers from the TTO schools, that it is still expanding. The Dutch have something sorted out. It's not just that they are so competent in English, and bilingual learning, they have a structure and a system in place which is only to be praised by the rest of us who wish we had a similar support and development structure.

There were many publishers at the event. I spent some time talking to the local representatives about their publications. 'Translation and simplification' were words used by one to describe how their books are produced, translated from the original Dutch, and simplified to suit the language level of the learners. 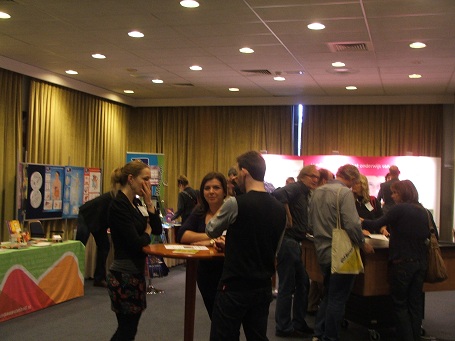 Great many CLIL books on the stands in the exhibitors' hall

Other publisher links and training resources at the event: 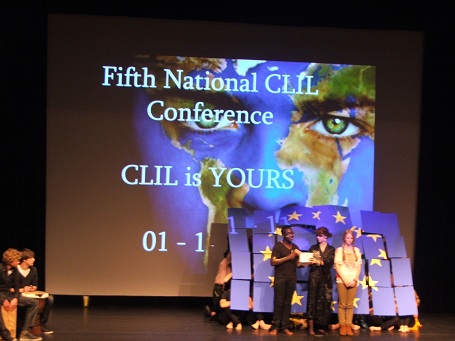 Leraar24
http://www.leraar24.nl/zoek/dossier?log=search&trefwoord=clil
There are video clips in English and which relate to a wide range of classroom aspects 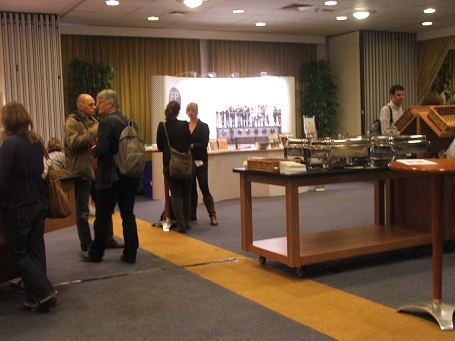 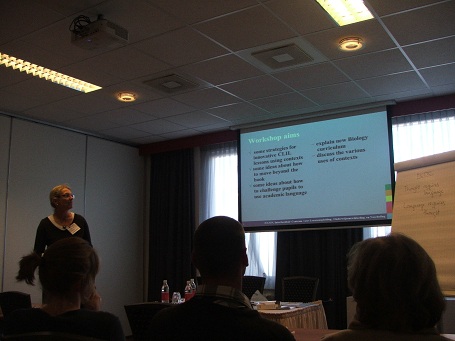 Els de Hulla a biology teacher educator who works with a lot of CLIL teachers gave a very interesting workshop on the 'Dodo', with a focus on the skills of investigation into an extinct species. I particularly liked Els' suggestion to get students to read the original text, but to present students with a task that gets them to transfer information without being able to 'copy and paste' from the text. She did this with a text which looked at the advantages of the preservation of different species and then followed this up with a question which gets students to consider 'What if the dodo were still with us today', so that students would have to draw on the advantages but create their own predictions. Nice!

Els is part of the team at Leiden University where the ICLON CLIL Courses are delivered: http://www.universiteitleiden.nl/iclon/.
www.worldteachers.nl

At Els' workshop I learned about the new Biology curriculum which has a focus on concepts and contexts, as well as forms and functions. This is an exciting development (and particularly important for a CLIL method) as it has the focus removed from a specific content to skills for dealing with any content focus. Here, for example, we looked at the Dodo but it could just as easily have been any other extinct animal for which we had to investigate the advantages for its species existing in the world today. This is good for CLIL because CLIL is about skills, and language for those skills as much as teaching about a specific content area. 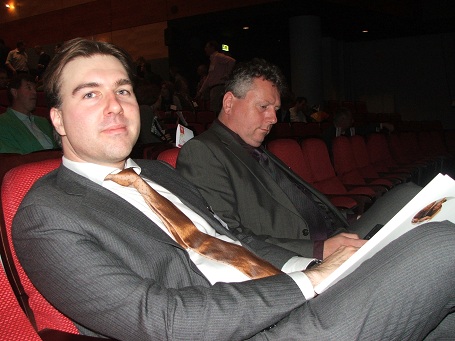 Onno and Stefan from the European Platform, conference organizers 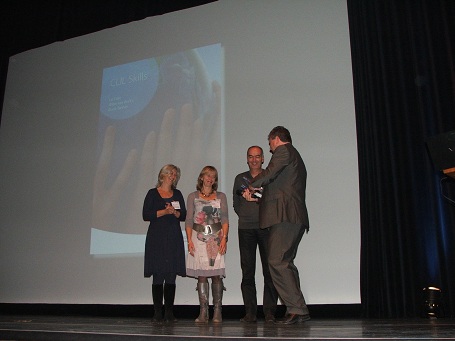 It was nice to see that the European Platform has issued a second print run of the CLIL Skills book from Rosie Tanner, Liz Dale and Wibo Van der Es, congratulations to the colleagues for their success in getting this book out into the world, sold out and reprinted!

My keynote focused on General Academic Language and was based largely on the resources at the Your CLIL section of Macmillan's onestopenglish.com website. 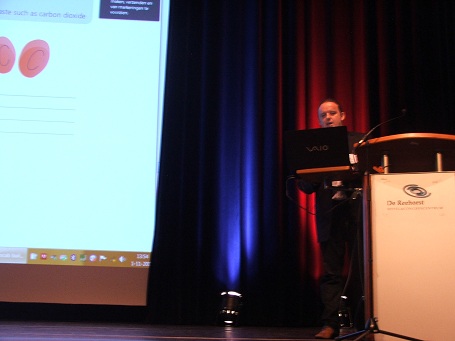 me fluffing my lines 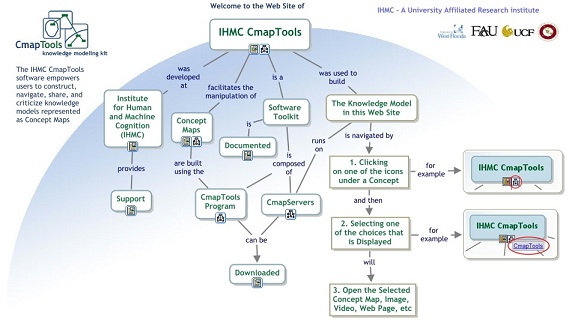 I got excited (I know, I know, get a life...!) when I found this site, it's basically a website for producing maps of concepts where you can not only put noun phrases in the cells on the map, but you can also embed other parts of the sentence into the branches of the tree. This, in short, means that you can create a diagram of complete text which is extremely useful for structuring learning and memorising.

I've been trying to persuade Macmillan to reproduce this software in some form on their website so that teachers can create their own maps, leave a copy for others, and in that way build a bank of ready made maps of content and language... we wait and see! 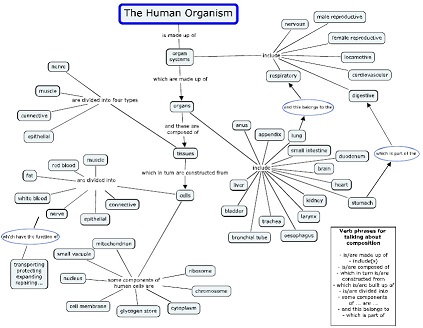 What you can see here, is a concept map of the sort you can create using the site above, on the 'Human Organism' where all the key vocabulary is given in the cells, and all the key verb and preposition phrases are given in the branches. Imagine something like this for each unit in your textbook! 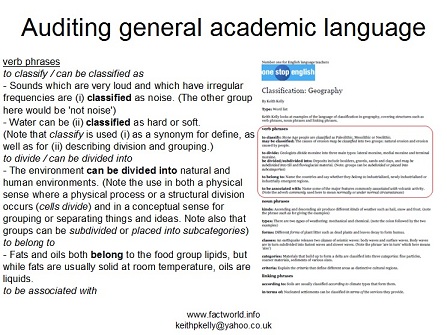 I don't want to go into too much detail about the Your CLIL resources, enough to say that they are an audit of the core language function and thinking areas of Science and Geography, and are available at the Macmillan website. There are 18 so far, I'll keep producing them as long as there is interest. Who knows, we may be able to do the same for Maths and for History at some point too! 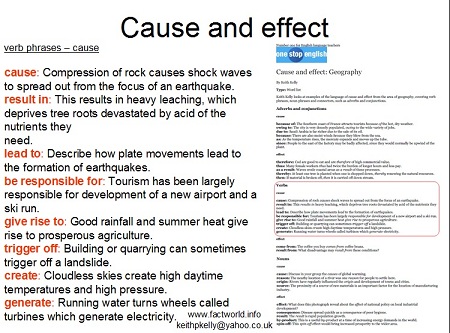 The last resource I wrote at the time was 'cause and effect' shown here. I used this one to contextualise a lesson plan, and supplementary resources which are in draft form and which I hope we'll see up on Macmillan's site soon for download. 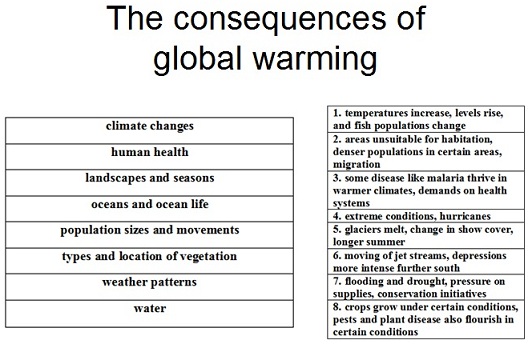 When students are faced with a task like this one where they have to discuss the factors affected by global warming and then discuss the consequences, they need language to be able to carry out the task, they have much of this language in the task itself in the slide and it is common for this language to be visible in tasks in textbooks. What IS NOT there is the general academic language needed to answer this task. 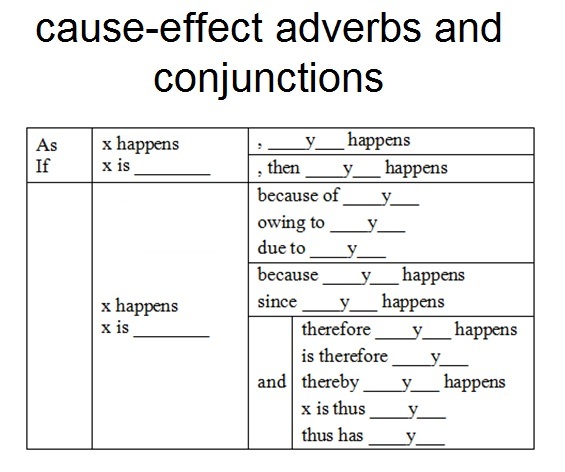 Students need to be able to create the language of cause and effect, the adverbs and conjunctions... 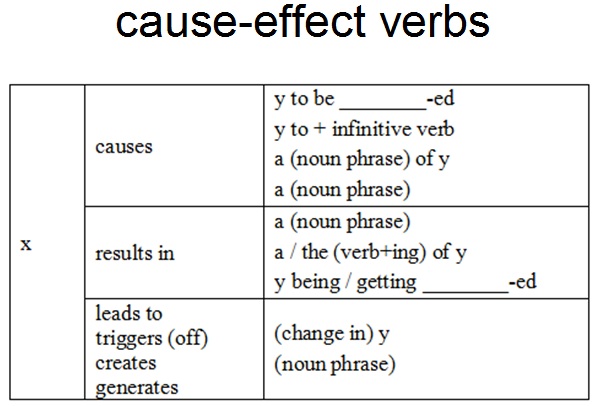 students need to be able to produce verb phrases ... 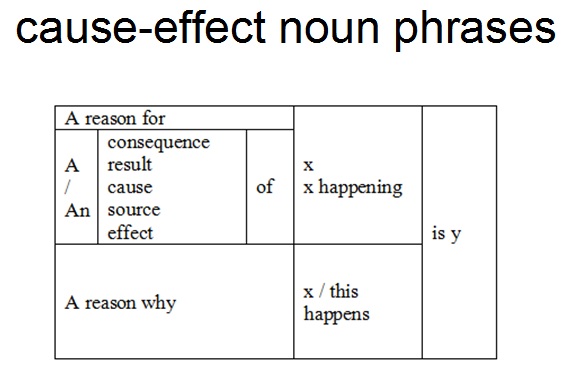 ... and they need to be able to produce noun phrases describing cause and effect.

I sat in on a Maths teachers' meeting chaired by Brian Dixon. It's good to see colleagues organizing themselves and this cluster group of around 20 teachers represented a wide range of experiences from decades to 0 years experience in the TTO schools.

It was well structured with Brian focusing immediately on what was achievable for the group in one hour. They set an agenda based on a questionnaire from a previous event, the results structuring this agenda.

Concerns revolved around the following:
1 - Teachers' level of English
2 - Students' deteriorating motivation
3 - Moving away from the textbook

1) The teachers were very concerned about their English, complaining that it can distract students from their lesson if, for example, the teacher mispronounces a word like 'isosceles'. There was an expressed need for more exposure to native speaker English and the coaching system was mentioned where schools have native speaker facilitators to help with teaching and language issues. Unfortunately, there aren't enough to go around.
freedictionary.com was mentioned as a good place for definitions and pronunciation.
My feeling is that it's more a question of self-confidence than a real problem for the teaching and learning process. The level of English of even the lowest level in this particular group (based on what I heard them saying in English) was very high. I work in countries where teachers are asked to teach maths in English, and they can't speak any English. I suspect that some of these teachers are worried about details, when in reality they are producing amazing results.
2) It could be that number two is related to the first issue. I never realised before about this problem, but teachers reported that in their TTO schools, it is common for first years to arrive with high motivation levels only for that to begin to fall after 6 months, deteriorating in the second and third years, so maintaining motivation is a big issue.
Suggestions about 'carrots and sticks' were given, for example, where students are given 'effort' grades for language which are reflected in parallel to their content reports. A card system is used where students are given pink cards for lack of participation, after 4 cards they are called to a meeting with parents to discuss motivation and participation, and in the end the question 'do you really want to be here?'

There is an issue here, I keep hearing teachers repeat the same question 'what does CLIL offer me?'

How can this be possible, that they aren't seeing the advantage of CLIL methods? 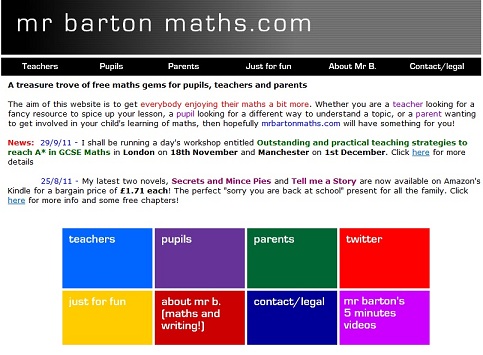 The third issue was discussed, and the site Mr Barton was offered for a portal of maths resources for those in need:
http://www.mrbartonmaths.com/ 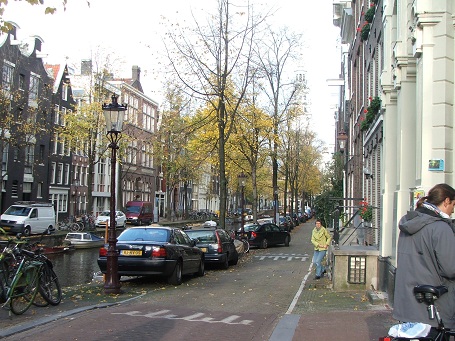 Lida giving me my annual cycling exercise, best way to see Amsterdam!    As ever, I had a delightful time staying with friend and colleague Lida Schoen, our YAC queen.

The weather held out to be lovely while we toured around Amsterdam and jumped on a ferry to the Cantine to watch the sunset across the docks. 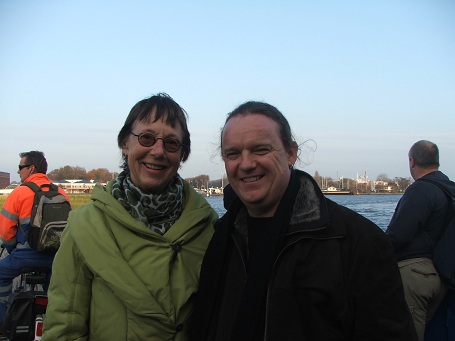 Lida would beat me back to Bulgaria where we are to present Veselina Vasileva with her IUPAC prize for the Global Stamp competition in which she came first in her age group. More on that soon! 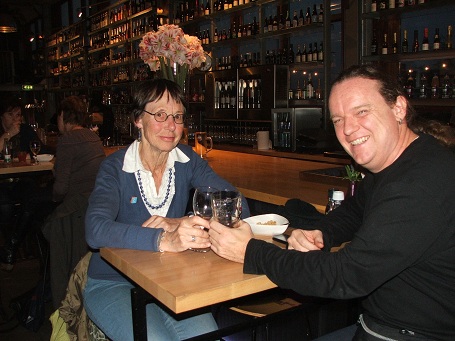 Well-deserved glass of Dutch beer (thanks for having me Lida, always a pleasure!)