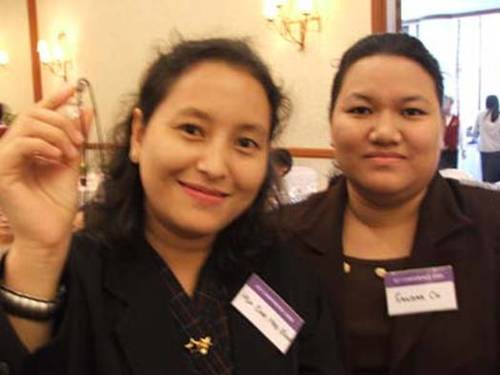 Myanmar - Language Across the Curriculum Conference

Language Across the Curriculum, Burma

The British Council in Myanmar (www.britishcouncil.org/burma) carried out a wonderful event this week.  It was the 8th annual meeting of English teachers which took place at the Sedona Hotel, Yangon, Myanmar.  BC Colleagues Natasha Buccianti, Marcus Milton and Michael Gordon officially opened the conference encouraging teachers to make the most of the networking opportunities at the meeting. 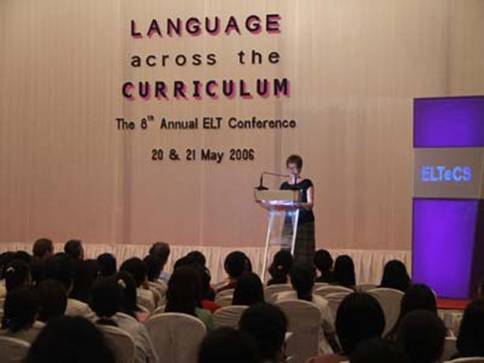 Vicky Bowman, British Ambassador, gave a wonderful welcome speech, well, from the reaction of the audience and her presentation style it was wonderful but I couldn’t understand much of it as she gave the whole thing in Burmese! 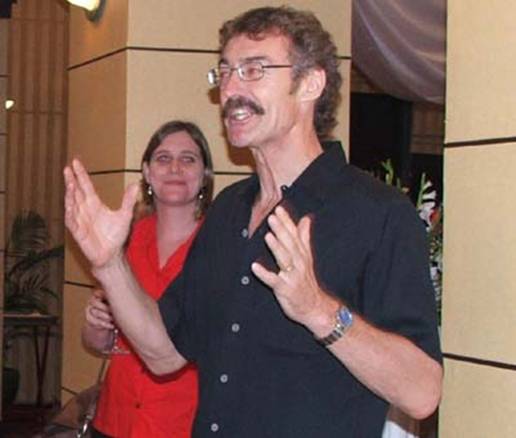 The event was particularly interesting for me because the focus was ‘Language Across the Curriculum’ and Michael Gordon (michael.gordon@mm.britishcouncil.org) of BC Yangon certainly made sure I didn’t spend all my time sightseeing while I was there, contributing 6 times in the programme.  My only complaint about this is that I didn’t get the chance to see any of the interesting presentations on offer.  Some of these included:

Integrating Pronunciation into the Content-based Classroom

Teaching Terminology Across the Curriculum

There were more than 400 teachers at the event and over 50 separate presentations on offer over the two days. 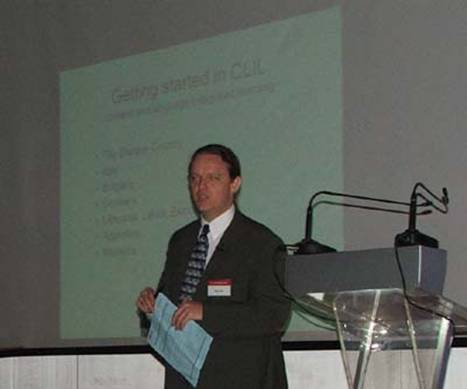 The opening plenary talk I was asked to deliver focused on Getting Started in CLIL and offered colleagues who were new to the area of CLIL ideas and where to start, materials, as well as news of what is going on around the world.

I also delivered two workshops which were repeated so that as many teachers as possible would have the opportunity to come along.  There were over 120 teachers at each of the workshops (a normal class size in Myanmar schools I’m told).

Workshop 2, perhaps the most significant, presented Science Across the World to the teachers. 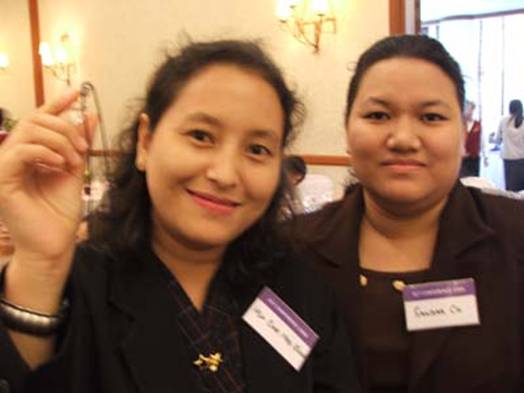 …trying to guess what’s in the bottle…
…is it your wife’s teardrops?
…is it water?
…is it vodka?
It's my DNA 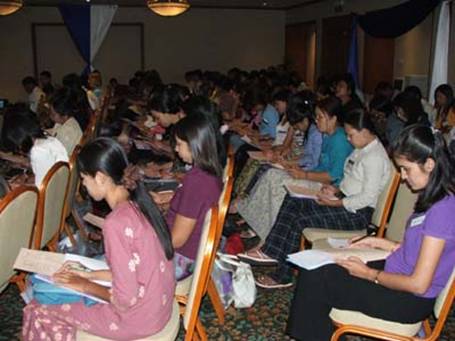 I think this was the most exciting part of the conference for me personally because the fact that these teachers can now get involved in the programme and create school links and carry out investigations and exchanges with partner schools around the world is a great thing to be instrumental in.  According to the Science Across database there were only two teachers in Myanmar signed up to the programme.  After this event, there is a potential group of 240 teachers. 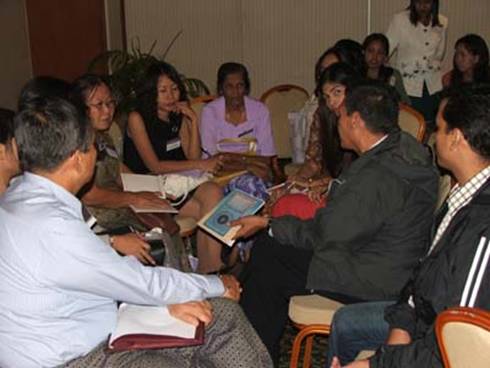 We even managed to sign up colleagues on the spot during the workshop, to rounds of applause from the gathered teachers, despite technical problems concerning the internet connection. 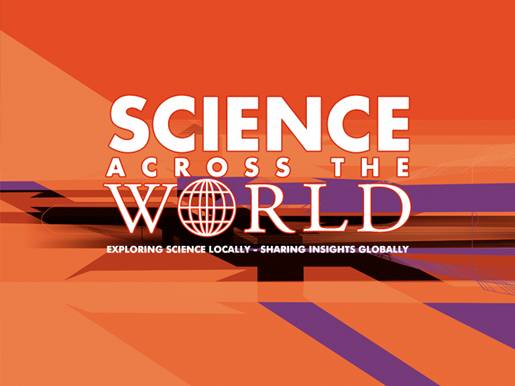 Alister Widdowson (alister.widdowson@mm.britishcouncil.org), a senior teacher at the British Council, has promised to see what he can do to ensure follow up to this beginning by offering teachers the opportunity to get together at regular BC workshops focusing on the Science Across programme.  I, for my part, will be sure to keep in touch with Alistair, and other colleagues in Myanmar, to support their work in CLIL. 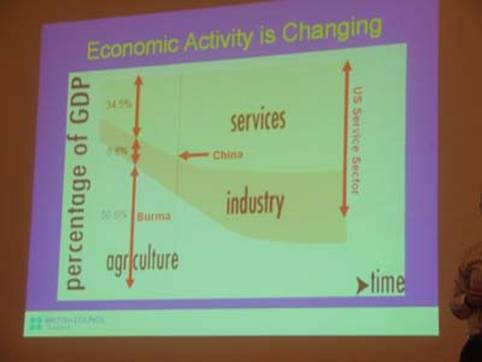 Alan Mackenzie (alan.mackenzie@britishcouncil.or.th) from British Council Thailand delivered a plenary on the future of English in the region based on the work of David Graddol and CLIL focused heavily in the predictions for the language education of the future. 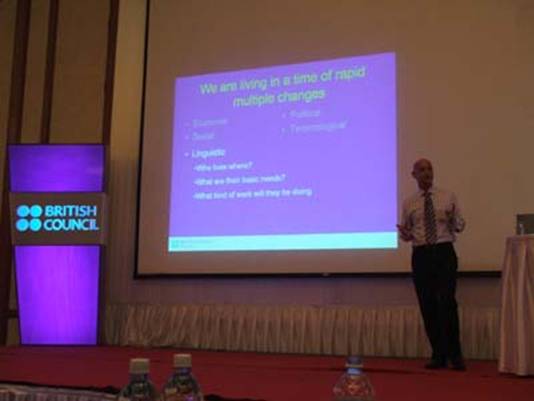 Some of the statistics are astonishing reading:

80% of NNS English communication is in Asia

75% of Thailand tourists use NNS English 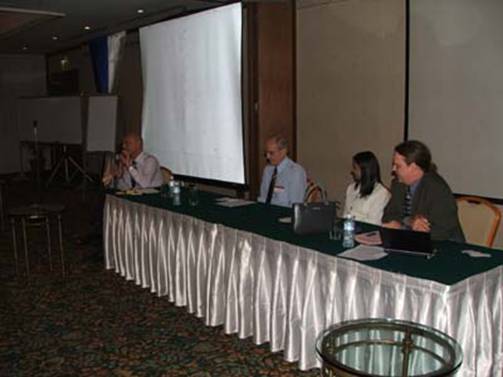 Alan, myself, George and Kathleen also got together for a panel with the theme ‘CLIL – the end of ELT as we know it.’  There were 120 teachers plus at the panel discussion and each of the members of the panel spoke for 10 minutes on the theme and this was followed by the audience discussing what they had heard to identify ‘something they agreed with’ and ‘something they disagreed with’.

George presented examples of past and present initiatives which integrate content and language suggesting CLIL is nothing new and that we’ve seen it before.  Kathleen spoke of recent developments in language education in Burma, challenges and the enthusiasm of language teachers to embrace a new trend such as CLIL.  I have to admit that I pretty much proclaimed the death of ELT with the advent of CLIL, taking on the role of provocateur for the topic being discussed.  Indeed, Alan’s presentation on the future of English in the region laid out simple facts such as the fact that more and more children from year 1 are being taught English.  Eventually, these children will reach secondary school, some already have, and they will demand new things from their teachers.  Children are already being taught subjects through the medium of English in the region.  Maths and Science in Malaysia is a good example.  This trend will grow and with this growth the role of the English teacher cannot fail to change.  In the Bilingual Project in Spain English teachers work on ‘literacy’ which is geared specifically to the language of the subjects being taught in English.  We will see English teachers working more and more with content teachers, expected to be familiar with the curriculum content of the subjects of their colleagues and preparing their classes accordingly.  English teachers will play a role in the language development of their colleagues.  This might be seen in terms of simply teaching the language of classroom management to their colleagues where there is a need and so that they can begin to create as rich a language environment in their subject lessons as possible. 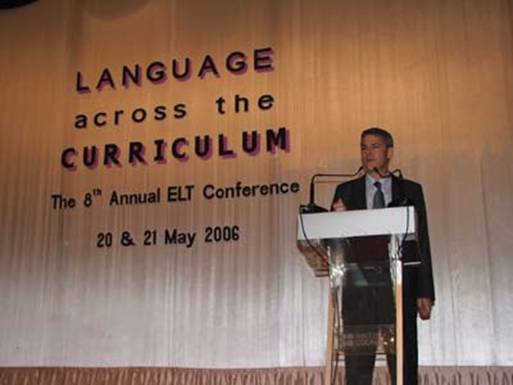 I also said a few things about welcoming the death of traditional language learning, generally speaking that if CLIL brings about the end of meaningless, uncontextualised, purposeless language lessons, it is to be embraced with open arms.  It was refreshing that there were colleagues ready to stand and speak in disagreement, since that was precisely the point.

Michael brought the conference to a close stressing how well colleagues had reacted to the invitation to contribute to the theme of Language Across the Curriculum.  Indeed, the programme had been full to bursting with presentations of topics related to integrating content and language.

There were prizes, applause and much enthusiasm to take the initiative forward and I for one will be keeping in touch and helping where I can.