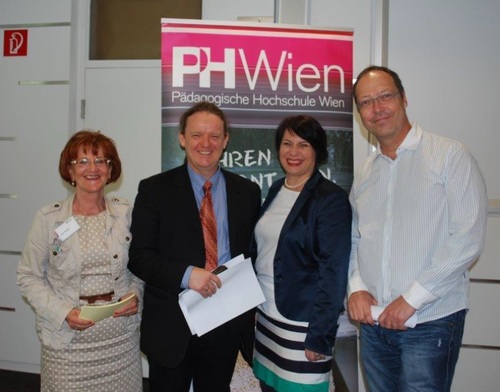 This was quite simply a great event!
It's the first meeting for a network of teachers from schools around Austria, all working in CLIL.

I've been teaching at the University of Education in Vienna since 2009 and started teaching CLIL to teachers from Austria's prestigious HTL Schools (these are Technical High Schools where teenagers learn construction engineering, computing, design and many other things) in 2011. There is a report on the first group in this course on this site.
In September 2013, legislation came into being which obliged all the HTLs to offer some of their year 3 curriculum through the medium of English. In the period 2011 to 2014 I've worked with around 300 teachers from these schools from a wide range of subjects.
There is a web portal to support the work of the teachers involved at the HTL main site with sample lesson materials from a number of subjects in English.
We also set up a Google Group called HTL-CLIL  with over 200 teachers at the time of writing.
HTL CLIL Teachers also have a page in facebook called CLIL Vienna with a growing audience.

The HTL CLIL Conference brought all of this energy together for a very dynamic event.
The conference proceedings are attached below.