This discussion is a revisit to CLIL terminology, methodology and contexts based on developments over the last two years of Café CLIL discussion.

You can listen to the recording of this discussion at this YouTube link.

There has been a growth in the area of CLIL over the last two years in many respects (publications, methodologies, blogs, events, interpretations of CLIL). This discussion brings a redefining of CLIL back to the table. Unlike previous discussions on defining CLIL, this discussion has very specific questions which come below. Colleagues were given the prompts below for this discussion. The decision to table this discussion is from conference discussions, e-group discussions, blog postings describing CLIL methodology in a variety of forms. The Café CLIL discussion group will attempt to clarify some of that description in the one hour's recording to be posted above.

Prompt discussion points given to colleagues were:

1) What is CLIL? I’ve kept this deliberately broad so that we can
differentiate between what language CLIL teachers and content CLIL teachers are looking for and need and what is being described as CLIL for them in the CLIL literature.

‘The more we talk, the more diverse CLIL becomes’: ‘CLIL is organic’: ‘There is a clear differentiation between ELT CLIL and Content CLIL’
Reference to Eichstatt – give link to OSC http://www.onestopenglish.com/clil/clil-teacher-magazine/editorials/editorial-focus-on-the-clil-2010-conference/550666.article

‘It’s the C and L that define CLIL’: ‘CLIL has become everything to everyone’: ‘To insist that CLIL is an umbrella term is not correct anymore’
and to IES Sanchez Lastra: http://web.educastur.princast.es/ies/sanchezl/archivos/materiales_dide1cticos.html: It’s the ‘through’ not the ‘in’ that is CLIL: ‘With this definition, we exclude a lot of subject teaching in English.’

2) How important is culture in CLIL methodology?
Following on from current FACTWorld group discussion.

‘Some subjects force you to focus more on culture than others’. There was balanced opinion with slightly more weight for culture not being a fundamental pillar of CLIL methodology, but rather an useful awareness in teachers working through FL.

3) What are the main / key dimensions of a CLIL methodology?
This point was dealt with among all the issues raised during the whole discussion.

4) What resources have come out in the last 2 years since the Cardiff debate, since Café CLIL started which we might call ‘real’ CLIL stuff.
Here, I could scan some published CLIL resources with a view to constructive discussion of them as CLIL resources.

Here, discussion returned to definitions:
A subject teacher who was fluent in English teaching to students fluent in English who made no reference to language, would this be CLIL? No.
There is a suggestion that CLIL methodology by default is more visual.
Total immersion isn’t CLIL, because identifying language demands and making decisions about what to do about that language, what tasks to build in to support that language is what defines CLIL.
Eichstatt CLIL Conference 2010, presented colleagues who speak of CLIL as immersion, and colleagues who speak of CLIL as language focused.
In conclusion, there is a suggestion that like a doctor diagnosing a patient we need a check list for identifying a methodology as CLIL.

I’d also invited Phil Ball to join us but he couldn't make it sadly, we'll get him another time! He has written extensively in educational media about the need for a clear definition. You can read a lot of what he says at onestopclil.com.

I'm also posting here a summary of a recent discussion in the FACTWorld yahoogroups list, and while I hope I've provided a broad spread of opinion and comment the cutting of the texts is completely my responsibility.

What is the role of culture in CLIL Methodology?

I posted a review of a paper - Developing Material for Physical Education Lessons in CLIL, Meike Machunsky 2007 and I questioned the central role in it given to culture in CLIL methodology, which has also been proposed by a number of important texts, books and articles (CLIL - Hood, Marsh and Doyle) and the official EU line as well.

I disagree that culture has a central role in CLIL, or even shares an equal role to the other pillars of CLIL, namely language and content.  It may be an extra, but isn’t generic CLIL methodology. Some argued that as a part of language education, CLIL cannot be without a culture dimension, others argued that culture shouldn’t be there by default:‘Why should CLIL be founded on 'themes in language education' since it's actually about PE in English, or Physics in English, so it's about the subject rather than the history of the language methodology?’‘Culture can not be apart from education or teaching, and I don't think CLIL must be something neutral or inert.’‘Physics is Physics, Maths is Maths whether it's in a mother tongue or in a foreign language.’‘CLIL, as one suspected might happen, is suddenly everything to everyone, when all it really is is a subject-based methodology that attempts to teach efficiently through another language, other than the mother tongue.’‘CLIL is not some sort of mysterious life-force. If you have to teach photosynthesis, there seems to be no overriding requirement to bring in 'culture'. Content is content. The curriculum is what it is. If cultural aspects are brought along in CLIL's wake, either directly or indirectly, then fine. But what we need to avoid is the *reductio ad absurdum* of 'culture', where absolutely anything in classroom practice could be defined as such. Has there been a class since the dawn of mankind that has *not*contained some content, some culture, some communication and some cognition? These things occur by default in an educational context. The quality of their occurence is the concern of curriculum planners and materials writers, but not exclusively of those of us who work in CLIL.’

Culture defining CLIL methodology:
It’s a mistake to want to get culture into a CLIL lesson by hook or by crook. CLIL is mainly subject teaching in L2: the teacher’s business is to teach the subject – make sure their kids get grades in maths or geography or whatever it is. That’s crude but it’s the truth. And I hope not too many teachers are anxious about somehow squeezing culture into a maths lesson when what they need to be doing is maths. It may be, as Do Coyle suggests, that culture, in some shape or form, must be present in any didactic unit or sequence, but that doesn't make it CLIL.A single definition of CLIL is pretty much impossible once we begin to take the dimension of Context into account. I assume that this dimension was included in Do's model, precisely because of the variety of CLIL/ content-based teaching models that exist, thus reflecting the context-dependent nature of what we do ( even if the aspiration is to create common and shared parameters).... Similarly, by promoting the inclusion of plurilingualism / culturalism in content, we pass on skills and positive attitudes for the business of living in a diverse and dynamic world. In this way, 'we do culture' (as opposed to teaching culture as one would teach/objectify content) and we ensure that this 'baffling word' is not just a token element of a CLIL programme, simply because it has to appear in any educational context.

There was a warning:
Are we prescriptivists in determining what CLIL must be?‘A cultural aspect in every lesson makes that harder to juggle and doesn't necessarily help teach the subject either.’‘I think that Culture is somewhat "forced" into the CLIL curriculum. Many teachers struggle to find a cultural point in anything (as photosynthesis), and it doesn't have any sense to do it.’

Culture and language and the curriculum:I think Culture is part of CLIL, either we wish it or not. In my opinion when we use a different language we are not doing something "neutral", as we are introducing a "new" or "different "culture in our lesson. It is not only a question of being semanticists (we can't avoid it anyway), but culture is dynamically crystalized in the way a language "builds" a concept, transforms it, presents it.… and …The discussion on culture doesn't come from the Biology curriculum, it has come from somewhere else, I suspect from colleagues with language learning in mind. Hard CLIL is about the subject first, language second, culture perhaps, but not essentially.

Specific references to culture and language:‘English is linked to many cultures (British, North American, Australian, Indian, Maltese...), we must not forget that, but language shouldn´t be treated as mathematical language it DOES have a cultural dimension. Not having a deep knowledge of a language should not be an excuse for us teachers to use the language exclusively as a code, we must make an effort to deepen our knowledge of the cultural aspects of the language we use for CLIL and bring them up when useful or as curiosities which can enliven our lesson.’‘When you teach a content in a different language, and you use a material tha has been produced - let me say - for an English kid, you are guiding him/her towards a different way of elaborating knowledge.’

An invitation to visit: the ConBaT+ website at the ECML - http://conbat.ecml.at/. The aims of this project are about integrating the plurilingual and pluricultural dimensions into content to promote positive attitudes to languages and their speakers, including teachers' attitudes.’

There were opinions about publishing:The publishers are taking CLIL and 'softening' it, because they can't make any money out of 'hard' CLIL.

There were attempts at defining:There are four types of content: *Conceptual, procedural, linguistic* and * attitudinal*. Culture can be a transversal component of any of these, but it cannot define CLIL.

It was a great discussion, and if you’d like to read any of the discussion in full, you’ll need to join factworld@yahoogroups.com or keithpkelly@yahoo.co.uk and I’ll add you to the group. 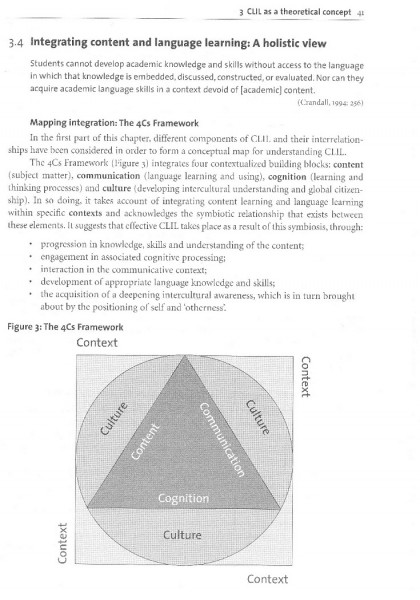 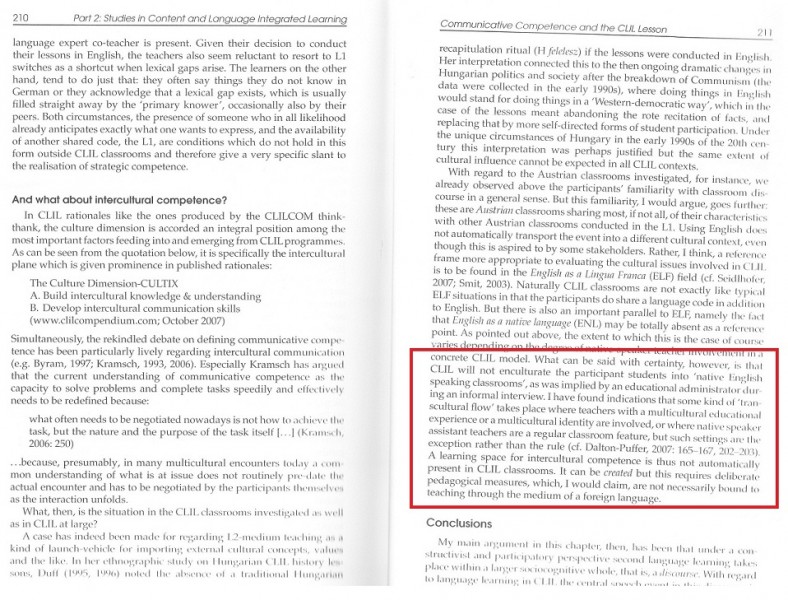 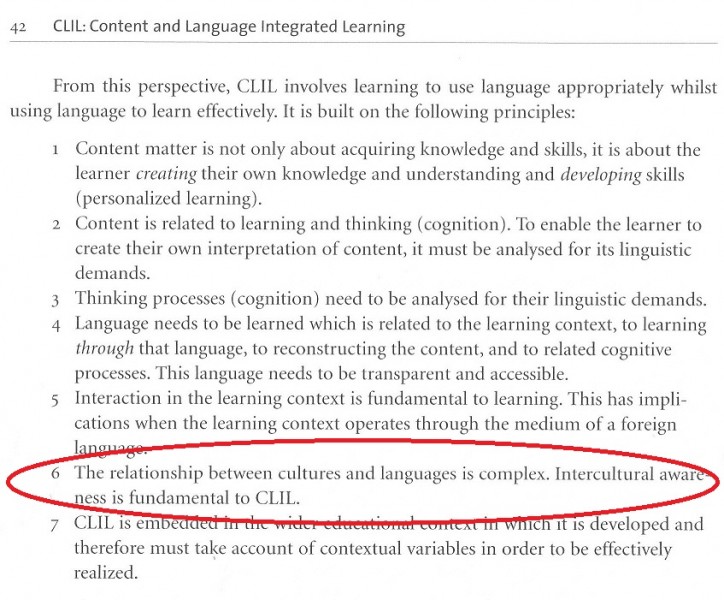 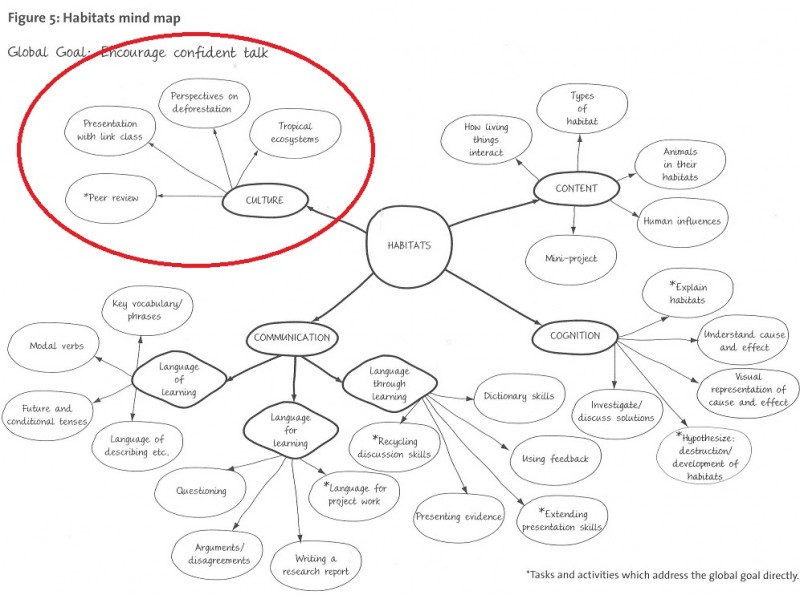 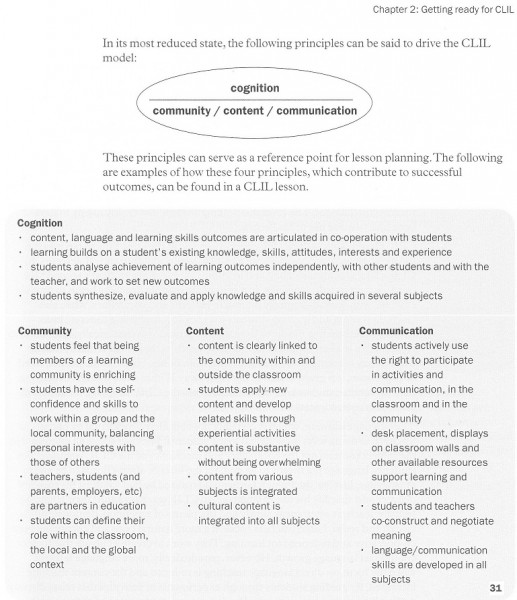