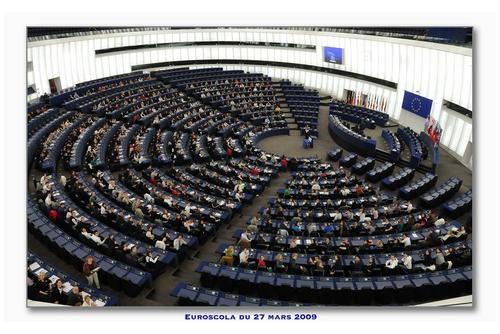 Zlatarski International School at the European Parliament
The Euroscola on 27th March 2009, Strasbourg
A teacher’s diary
By Lyubov Dombeva

Early morning before dawn, cold wind carry drifting snow when the bus takes off from Sofia to Strasbourg. Before we know it, it’s time for border control at Kalotina. Quick check and we’re allowed to Serbia. Short stop for refreshments and the sun smiled at us for the first time. Sleepiness was gone and we’re happy to listen to our guide telling us the story of the lands we cross from ancient times to the most recent history.
We crossed over 700km that day, but in jokes, talks and songs with friends it didn’t feel much.
First night stop in Zagreb. Lovely city and we pity we had no time enough to visit more of its beautiful sights. This is just one more reason to come back again to this beautiful country and its cheerful people. But we have to rest well now as more roads await us tomorrow. 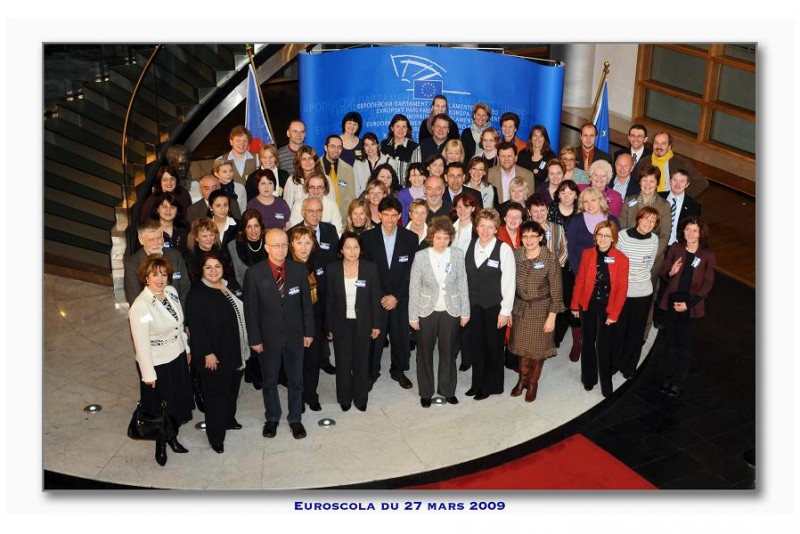 Another early morning start, but the sky was bright and the feeling was optimistic as we began the ride. Soon we crossed the border with Slovenia and once again we traveled through the EU. No more border control for us until we attempt to leave Hungary on the way back home.
The smooth road and the short night rest had their say when the bus rocked everyone to sleep. The team had never been so quiet before but it only lasted for couple of hours.
We woke up from the cries of awe at the sight of the magnificent Alps covered in snow and wide awake we started an enthusiastic photo session.
We crossed from Slovenia to Austria through a 7km tunnel under the mountain. More snowy mountains and fog awaited us in Germany.
Along the way, crossing now the plains of Germany we encountered a technological miracle - a self-cleaning WC that starts spinning to a brush when you wave a hand to the motion sensor.
Several hours later we were stuck in a traffic jam upon entering Stuttgart. Felt like ages.
Late in the evening we finally arrived at Strasbourg, France. Left the luggage in the rooms and wandered the empty streets around the hotel to find a restaurant for dinner. In the first one we saw inside a cheerful group of people who waved us through the windows to enter and join them for some salsa dancing. Hmm, a tempting offer but no, thanks, we were hungry. Few blocks away at a cozy Lebanese restaurant we found what we were looking for. 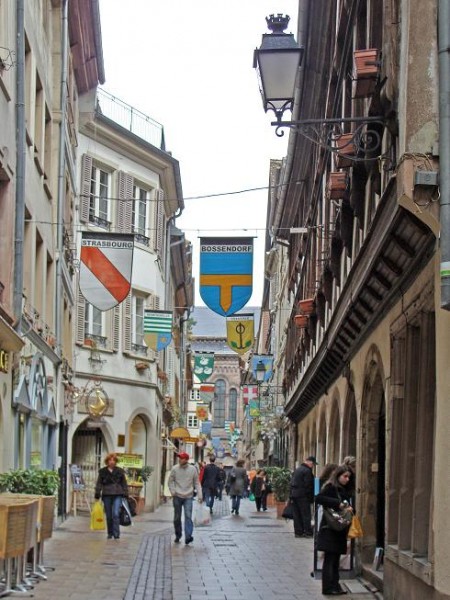 At 8 am twenty five sharp dressed young ladies and gentlemen went downstairs for breakfast, 8.30 we were already in front of the European Parliament. A bit surprised that the other delegations were not dressed so formal we all agreed that none the less we were the most impressive team!
After the detailed check at the entrance, we were led inside the Parliament’s building. Then the students had to choose which of the six working groups to join and here students and teachers were separated. What happened to them after this moment is a story they should tell.
As for us, we had a working breakfast with teachers from 19 other countries and a guided tour around the European Parliament’s building. Its architecture is impressive with the way it uses space, light and art. And although very official it doesn’t look sterile as glass and metal are combined with light-coloured wood that gives the inner space a warm and comfortable feeling.
After the tour we’re taken to the plenary hall, the famous semi-circle chamber of the European Parliament where the student delegations were already seated in their working groups. About five hundred students aged 17-18, from 20 EU member states were gathered together. Mr. Philip Otman, the Administrator of Directory General Communication and Information together with four other officials greeted the Euroscola assembly. The delegates were introduced to the voting system of the European Parliament and were invited to ask their questions about the Parliament to the officials who answered them. The questions ranged from what can the European Parliament do about the riots in Greece, and should there be a European President, to what are the advantages of the Lisbon treaty, and how to fight stereotypes and skepticism.
I was proud to see my students in this new light - more mature and conscious, behaving as honorable representatives of Bulgaria. 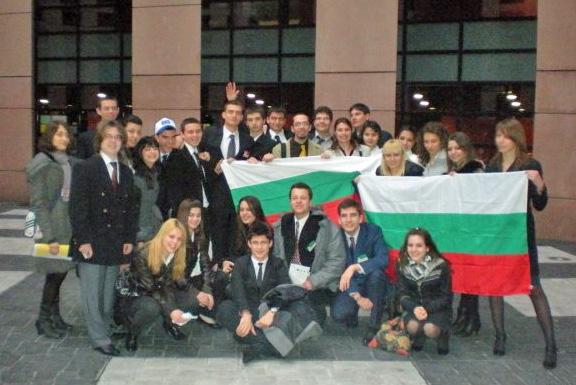 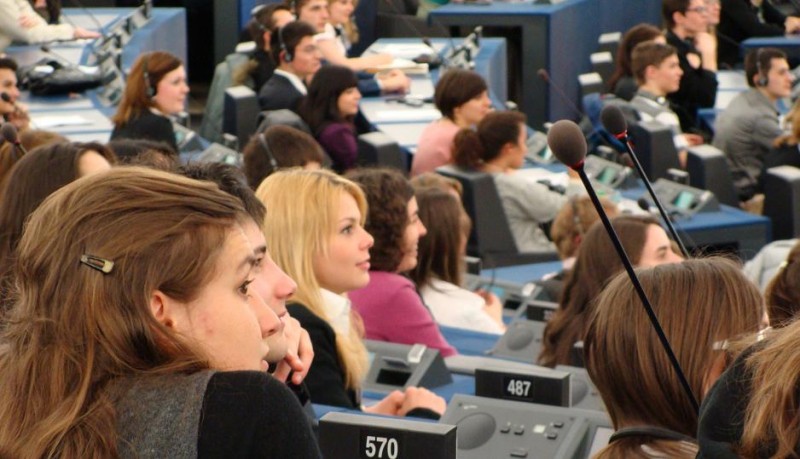 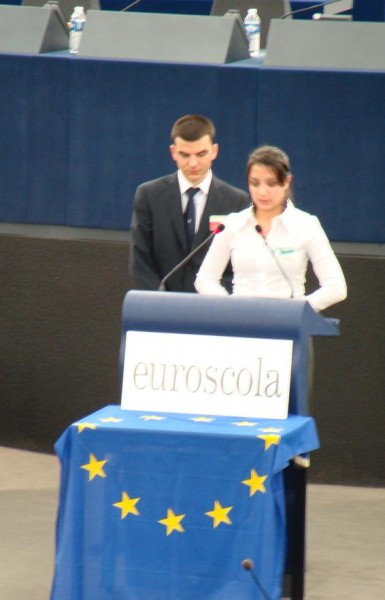 At lunch time, separated from the students once again we all played the Euroscola game, where in teams of four people from four different nationalities we had to answer 18 questions about the EU, asked in several of the official languages. Not an easy task unless you can read Greek, Hungarian and Finish altogether! In the afternoon Mr. Otman facilitated an official discussion among the teachers about who should come to the Euroscola day, who decides it and how, what should be done to make the young Europeans more active and more informed about the EU and the European Parliament.

After that we were showed the press centre and some more of the working space in the Parliament.
Meanwhile the students discussed in their working groups hot topics like how to encourage the sustainable development of the EU and the active participation of the European citizens in the coming elections for the Parliament on 10th June, what should be done to overcome the effects of the economic crisis, the negative political and social sides of the globalization, the future of Europe and more.
Then the assembly was gathered once again and the working groups of students presented their work and final decisions. After a short debate on each topic the delegates used their votes to support or fight a resolution, and in the end all six resolution passed successfully.
It’s late afternoon when we all say goodbye to the European Parliament, to our new friends from 19 countries and some of us feel they have to come back some day, maybe as representatives of their state to the European Parliament. 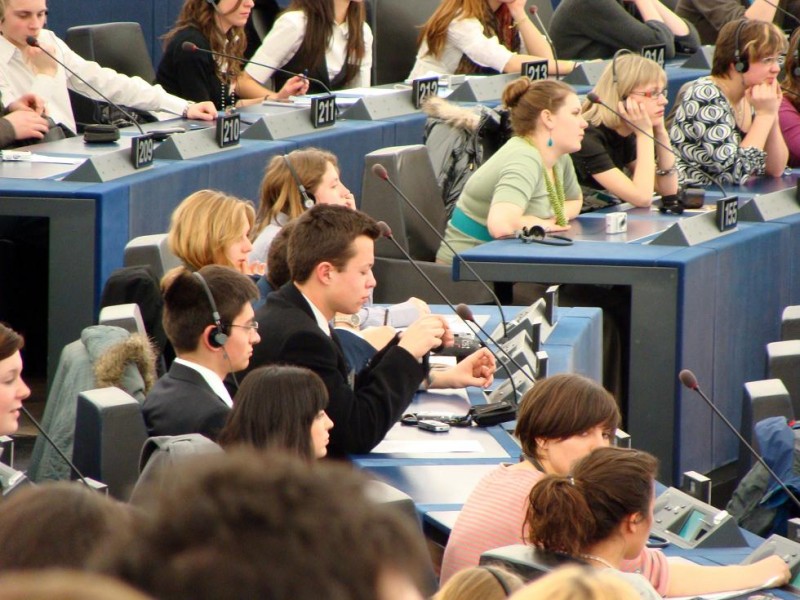 We went to the hotel to change into more casual wear and make a tour around the city. The rain had stopped, but as it had lasted for days the river was too high and the boat trip around Strasbourg was canceled, unfortunately. Anyway, we were happy to walk around and we had our dinner in a traditional French restaurant in the Petite France quarter. 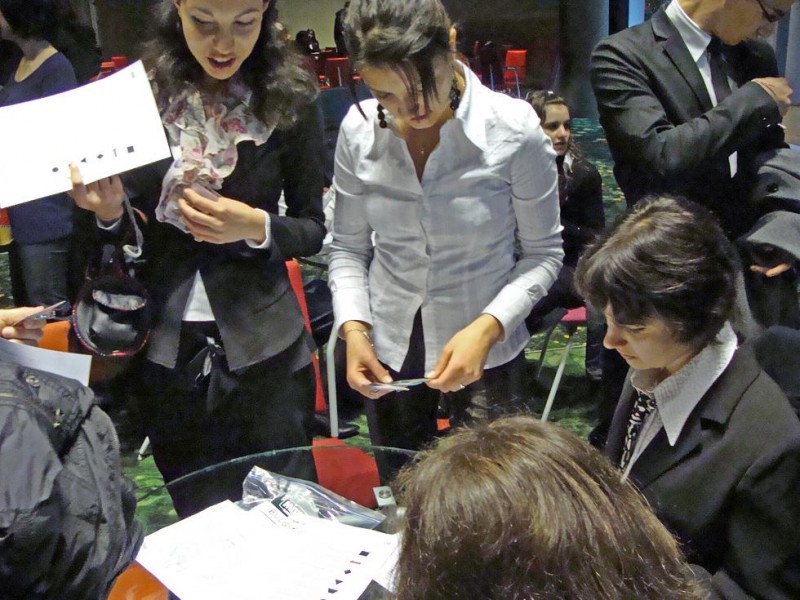 Later in the hotel some of us played domino before bedtime.

Day 4 - Saturday 28th March 2009
The breakfast was set for 8.30am and as my colleague Peschu and I considered it late we took the chance to make an early walk before that. We slowly walked the sleepy streets and took some photos. The newspaper shops were opening now and a cheerful stranger with a copy of Dernieres Nouvelles d’Alsace (DNA!) greeted us and wished us ‘Bon weekend’. Now talk about stereotypes!
When we were back for breakfast some people from the group had not yet woken up!  Then the whole group went to see the Notre Dame cathedral and shop for souvenirs. After that the bus took us and away we went on our way to Germany. Next stop - Munich. We got off near the Rathous, the Court’s building, and on Marienplatz our group split. Some went to see the cathedral - Frauenkirche, some went directly shopping. As for Peschu and me, we walked till we found a big toy shop. So carried away we were that by the time we found the guitar shop Peschu was hoping to see so much, it was already closing time. An indifferent man just locked the door from the inside and walked away unable to see the drama unraveling in Peschu’s heart! 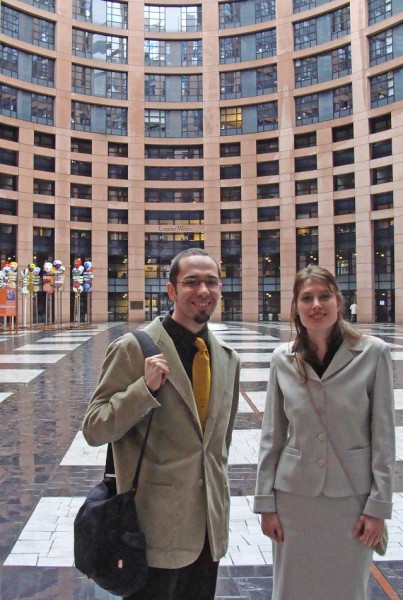 Then back on the bus with our shopping trophies we went to the hotel in the outskirts of Munich. There we enjoyed some traditional Bavarian dishes and the cozy beds for the night. 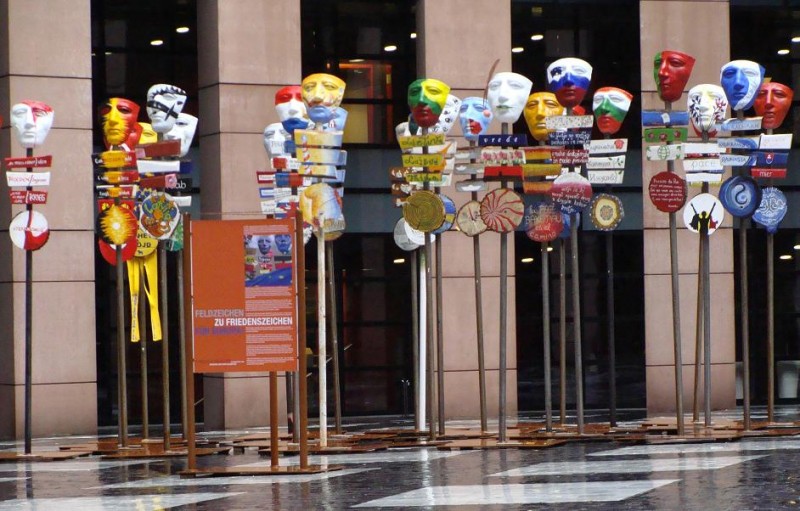 Day 5 - Sunday 29th March 2009
This morning even more people from the group were late for breakfast - the tiredness is taking its toll. We all slept for hours on the bus; the landscapes of Germany here offered nothing to the eye but planes. Occasionally, wind turbines caught the attention of those of us who fancy renewables. More sleep, then talks about Extended Essays. Some of the 11th graders are trying to clarify their ideas and worries about their research questions, the secondary sources etc. Then, the sight of the Danube. We were already in Austria, feasting on its delicious chocolate. A quick look of Vienna’s suburbs as we were headed to another capitol city along the Danube river - Budapest.
There were two problems with our late arrival there - the rain and the forint. And as there’s nothing one can do about the weather, we all agreed our life would have been much easier if Hungary had joined the Euro zone already. We visited the Fishermen’s towers and later walked the wide boulevards under the rain. We found a cozy restaurant to savour on the local cuisine - thick soups served in crispy bread and big plateaus with all kinds of meat.
Back in the hotel, another late domino game for those who could fight the fatigue. 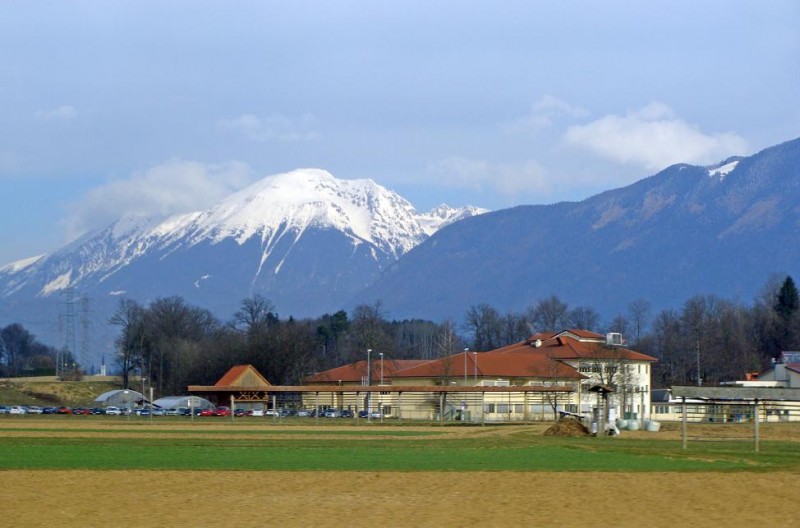 Day 6 - Monday 30th March 2009
It was the day of the long way back home. Most of us spent the time sleeping for hours or thinking of something on their own. I felt kind of sad the trip was over, but at the same time couldn’t wait to be back home.