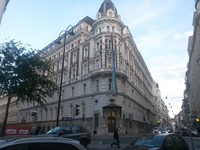 Austria - A Curriculum for International Education

A Curriculum for International Education
Vienna Board of Education, Austria
October 14th, 2014

I was invited by the Vienna Board of Education to give a talk as part of their well-known evening lecture series at their lovely HQ in Vienna.
Over 50 people came to the talk, a topic I've been passionate about for many years. It was a privilege to be able to address the question of what successful school programmes look like which teach young people for membership in the world community beyond school.

It's no secret that in some countries in Europe young people have suffered most as a result of the economic crisis recently - no jobs, few immediate prospects. We looked at what schools can do to best equip young people for mobility, employability and growth, three key educational targets for the EU at the moment of writing. 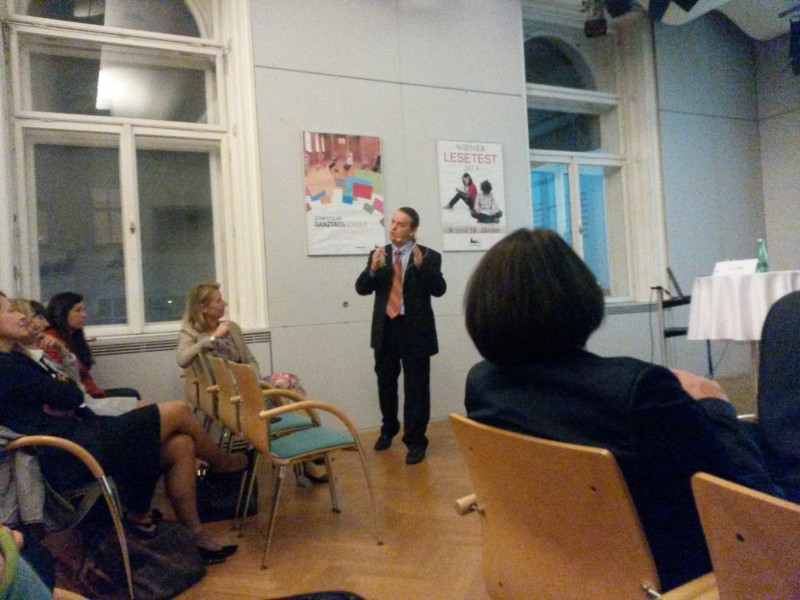 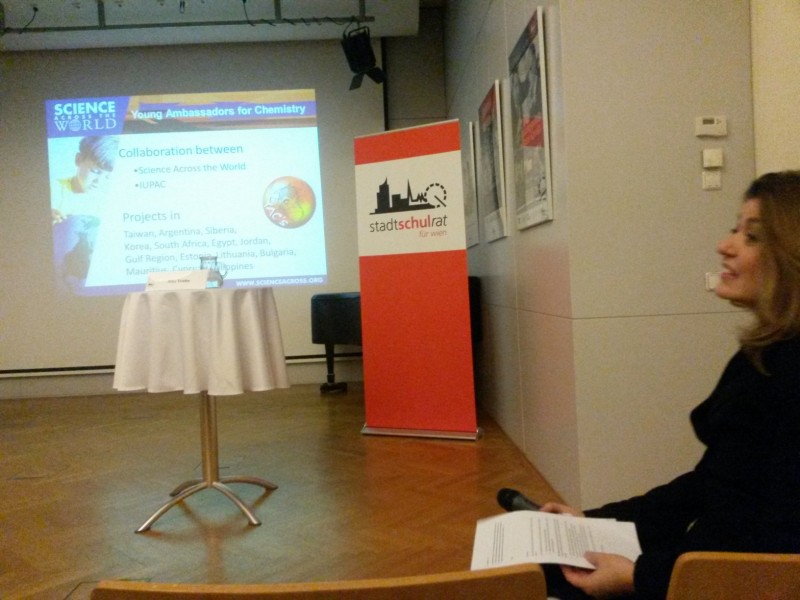 Nika Triebe chaired the event and kept discussion moving along, thanks Nika!

Keith Kelly is an education consultant, and teacher and author in the sphere of bilingual and immersive education. Keith is also a teacher trainer having prepared and delivered courses in CLIL and bilingual education all over the world. Keith believes that foreign language learning should start early and he is owner-manager of Anglia School - an immersive private school for very young children in his home town Plovdiv, Bulgaria.
Keith has been teaching courses in Content and Language Integrated Learning (CLIL) in Austria and at the PH Wien since 2009. He is passionate about young people learning professional and academic skills through the medium of English as a foreign language and sees Austria as a leader in this area. Professional skills and foreign language ability are two of a number of very important competences that young people desperately need to be successful in an economically challenging and competitive workplace that is the world today. Keith believes that curricula need to be designed specifically with these key competences in mind and with particular focus on mobility, employability and intercultural communicative skills that enable young people to best achieve their personal, professional and academic goals and ambitions upon graduating school. These young people need ‘A Curriculum for International Education’.
Keith has been an advocate for and activist in building networks for communication between schools around the world and is founder member and coordinator of the Forum for Across the Curriculum Teaching (FACT). He is also a committed team member of Science Across the World. In January 2008, Keith was made a Fellow of IUPAC (The International Union of Pure and Applied Chemistry) for his contributions to their educational programme. 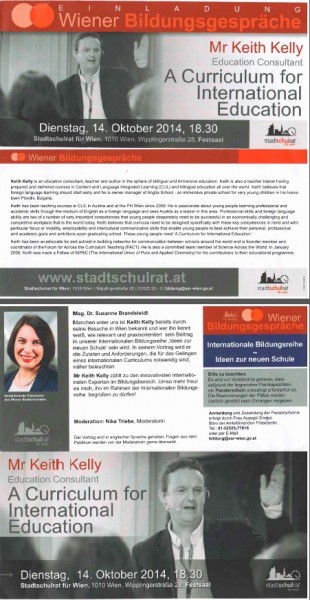 One of the ingredients for success in education for young people in Austria is that the system offers a diversity of options. Arguably at the top of the list of schools are the Technical High Schools (HTLs) where young Austrians learn engineering, electronics, computing, business and many others. The government has also legislated that these schools now teach technical subjects through the medium of English. Imagine that. Young Austrians are learning technical subjects in English as a foreign language.

Studying the curriculum through foreign languages is only one aspect of a curriculum for an international education. There are many others, for example intercultural communicative competence and young people learning 'soft skills', or being able to negotiate, compromise, empathize and others.

It was a lively talk with a lot of interaction with the audience and questions asked. No, bilingual, and plurlingual education isn't and doesn't have to be elitist. My answer to this question is simply this. It's only an elitist ambition that young people speak several foreign languages where ministries of education lack the imagination and creativity to implement language education effectively. Young people lose out because Min Ed isn't doing its job properly. A glaring case of this is England where governments since 2002 have seemed incapable of deciding what policy should be followed on foreign language learning. Incredibly England in this period made language learning an option for secondary pupils, a fact which still has the hair standing up on the back of my neck. Let's hope they get it right now foreign languages are being taught lower down the age range.

I mentioned Bulgaria in this talk. Bulgaria is hardly a leading light in terms of education on a global scale, but there are aspects of the system which others could learn from. For example, some secondary schools offer intensive immersion years in a foreign language, and not just English, but also French, German, Spanish and others. The youngsters graduate a year older because of this, but they study 18 hours of language per week for the entire first year of secondary school. Imagine that. Wow. I guess it's more expensive adding a year on to secondary schooling, but if the poorest member of the EU can afford to fund it...

I also talked about the dynamics of classroom practice. What do we have children doing in class? It's only by getting young people to work in groups that we can expect them to develop group-work skills. It's only by getting our youngsters standing up and giving presentations that we can expect them to have these skills when they apply for a job. These are some of the skills that employers say young people lack when they come to them for a job. We need to teach 'soft skills' as an integral part of the curriculum.

I mentioned Science Across the World as a fabulous example of a programme which integrates soft skills with hard skills from the science curriculum. Take a look, it's still freely available at the Association for Science Education (www.scienceacross.org).

Slides are attached below.