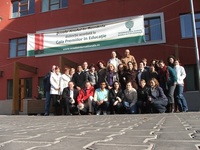 The school has recently gained approval to run Cambridge IGCSE courses and children in the school can follow an ‘international’ or a Romanian line of study. 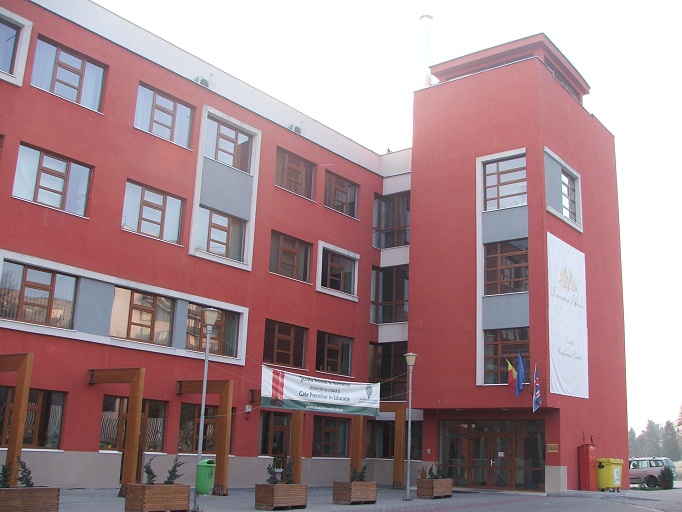 It’s one of only a very small number of private schools in Romania offering this form of education to young Romanians. There are some international children in the school but it is mainly Romanian. 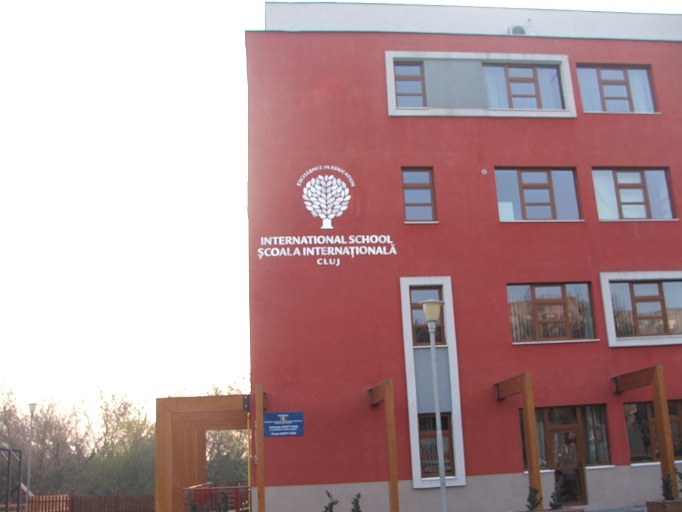 Colleagues explained that the impetus behind such a school comes largely from Romanian parents who are seeking an English-medium education for their children. Some of this generation of parents have been living abroad, may have started their families abroad and have subsequently returned to Romania to live and have looked for an educational opportunity similar to what their children received abroad, in the UK or elsewhere. 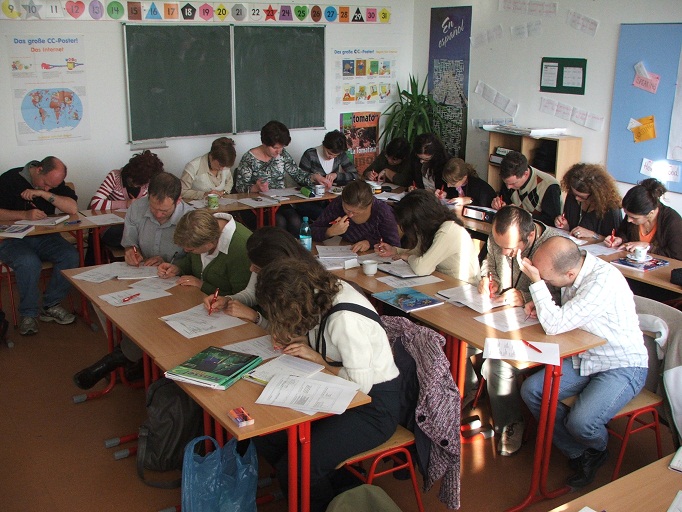 Teachers in a real classroom 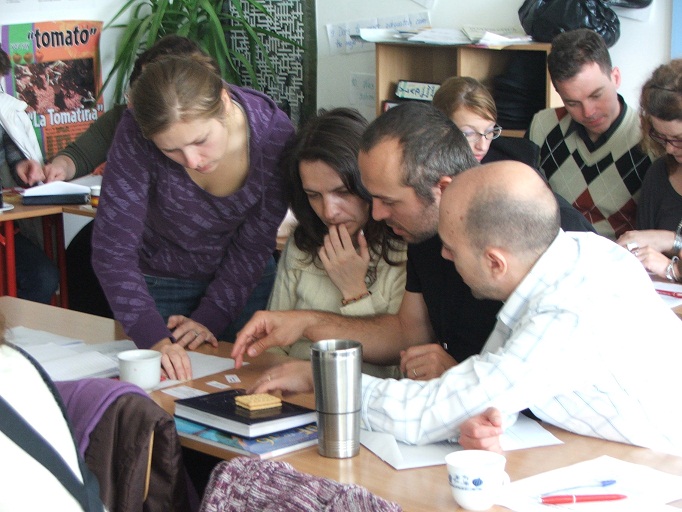 Group work on interactive reading
Though this is one school, of only a very small number in Romania I suspect that it is a trend which is likely to expand in number across much of Eastern Europe for similar reasons to those which set up the International school in the first place in Cluj.
I spoke with colleagues about the status of bilingual education in Romania and was told that there are very few ‘bilingual’ schools at all in Romania working through the medium of English apart from those found in the largest cities and there was a suggestion that even these schools may have the title ‘bilingual’ but the classroom reality is very different. Having said that, the Romanian government, my colleagues reported, is about to debate a new law in parliament at this very moment which will allow schools nationally to adopt the International Baccalaureate programme (web link) within the next four years. This is definitely something to keep an eye out for. 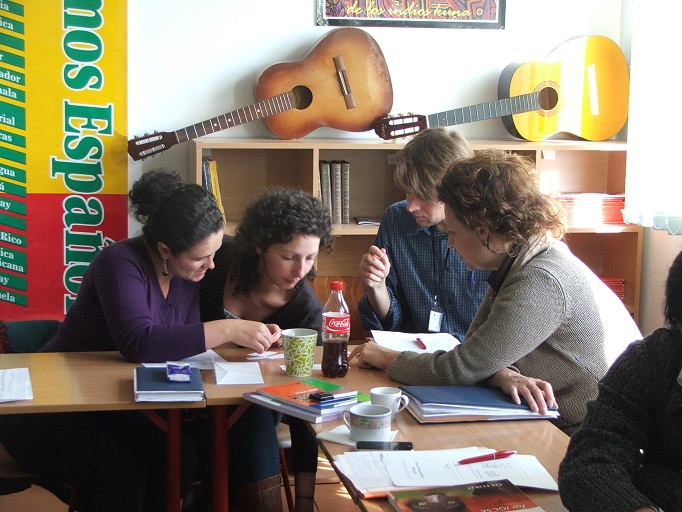 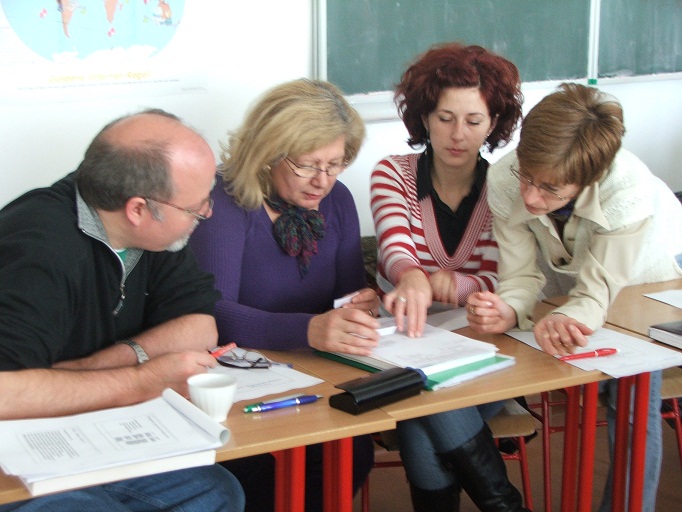 ...and not all the answers are the same

I didn’t have a lot of information to go on to prepare for the workshop. The school website is very informative, but as commonly happens in my work, I get to know teachers on the spot, and though I prepare an agenda for training, I have to be ready to go in a direction I may not have predicted.
I like working in this way with whole school training events, particularly when the school is relatively small because you send your message to everybody concerned and in return get a very good idea of what the whole school is about, by that I mean how the teachers themselves think and what makes them tick. There were around 30 teachers at the training from all manner of subjects including teachers from the school nursery, English, French and German teachers, not to mention Science, Maths, Geography, History, IT, Sport. 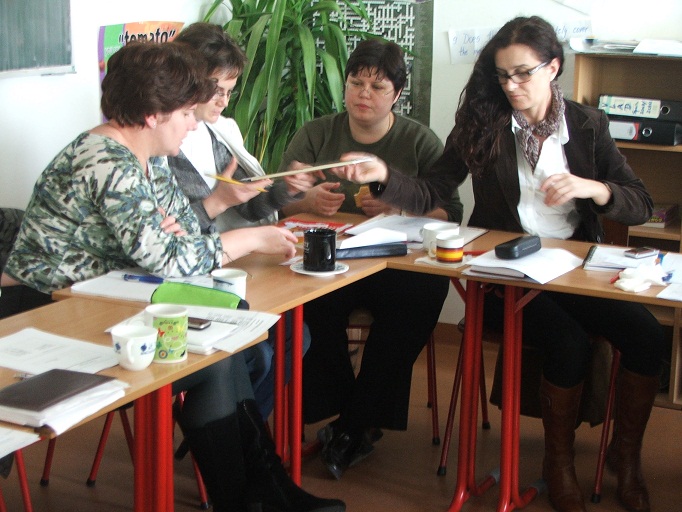 but that's the point 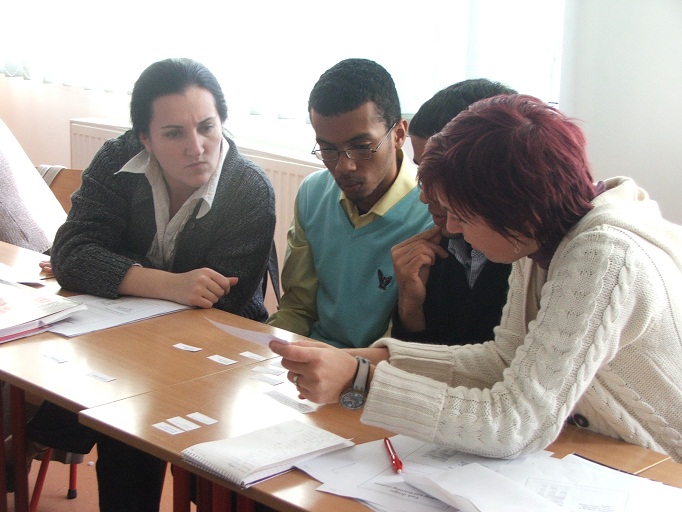 and then we looked at how such tasks are designed

The first thing I wanted to do was give a general introduction to CLIL, what I believe it is (subject discourse analysis + ‘CLIL’ task design) and go over what we mean by language when we are talking about a content subject such as Physics, for example.
From here, we moved into task design and I split the skills into passive and productive. In session 2 we looked at ‘listening and reading content’ (presentation handout below).
In session 3 we dealt with ‘speaking and writing content’ (presentation handout below).

The last session of the day was ‘any other business’ and an opportunity for colleagues to plan what follow steps they will take as a result of the days training. AOB was a prompt for their planning discussion in interest groups. I spoke briefly about assessment, networks and collaboration and of course colleagues were free to focus on any other aspect of the day they had found valuable and which they would like to pursue further. 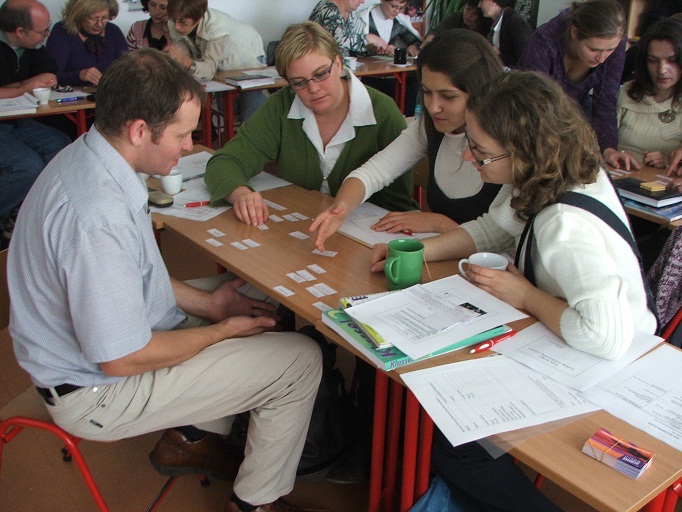 and colleagues designed their own structure 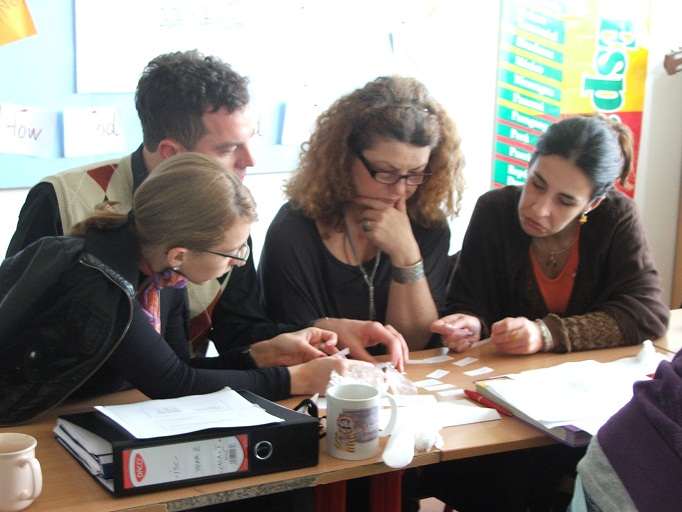 for a similar reading task

One thing struck me in particular about Cluj, I was told it was ‘real’ Romania when I mentioned that I’d only ever been to Bucharest before. I counted 5 people who smiled voluntarily to me during the routine moments of my stay in Cluj and now I have the impression of Cluj as the ‘smile’ of Romania.

I lost my hat! 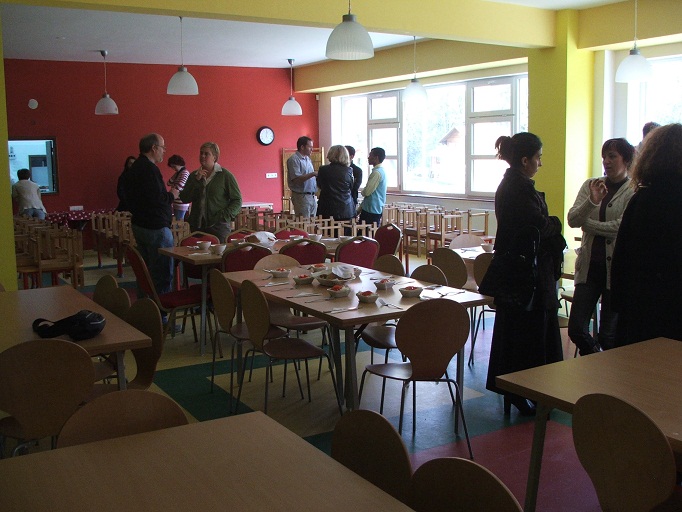 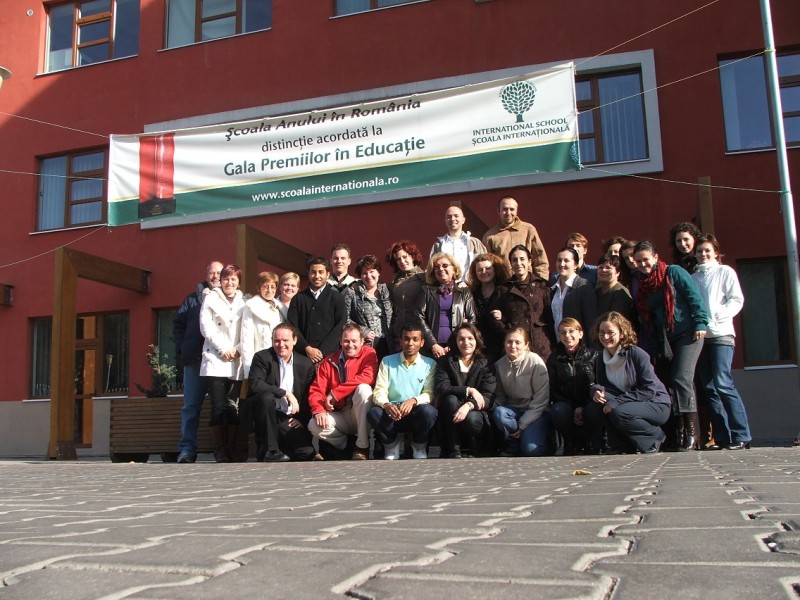 Lovely group of teachers, thanks for the warm welcome! 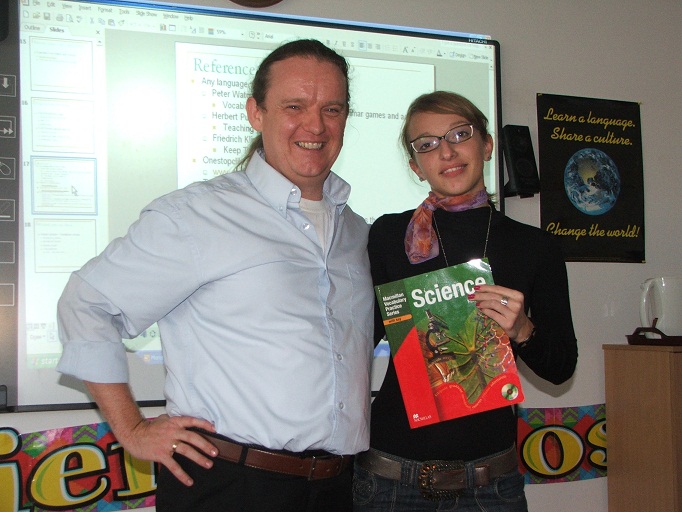 Many thanks to Macmillan for the prizes 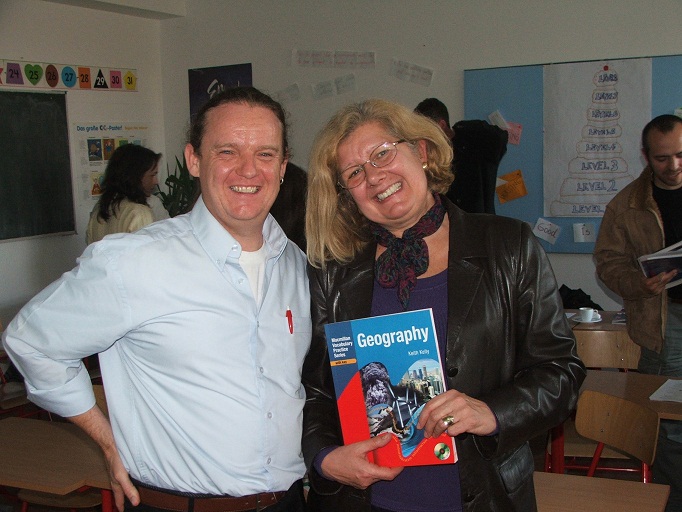 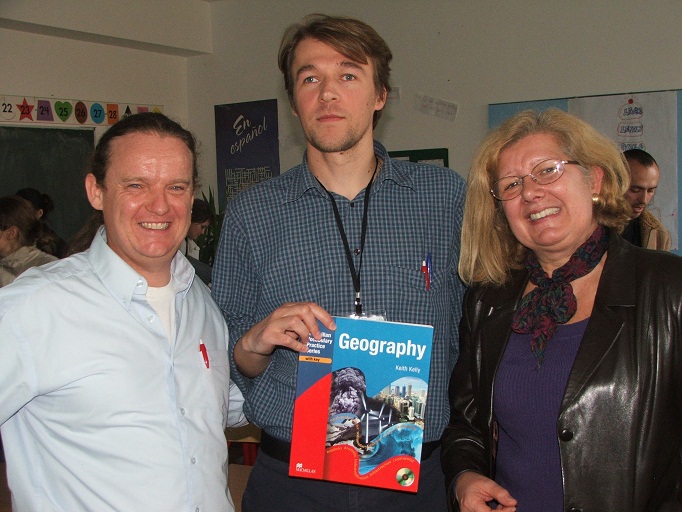 They went to the right teachers!

The timetable for the day:

(You can access all the materials at the links at the foot of this page.)

Follow up:
- Iulia, training coordinator, promised to let me have the group's email addresses, so we can begin to keep in touch and support their work in CLIL.
- Felix promised to set up a teachers’ group for the international school to support their work in CLIL – I’ve asked that they include me.
- I promised to post to find other IGCSE teachers working with past exam papers and items to ask how they organize the materials to coincide with textbook chapters (this is a little specific, but was a concrete request from one colleague).
- Find other bilingual nursery schools to identify common techniques for teaching reading in two languages.

I also met Sanda Gabor, a teacher of English and History through English at the bilingual school in Cluj (link to site) who has been instrumental in setting up a local CLIL site for teachers. Check the Romanian Association of Teachers of English for information: http://rate.org.ro/blog1.php 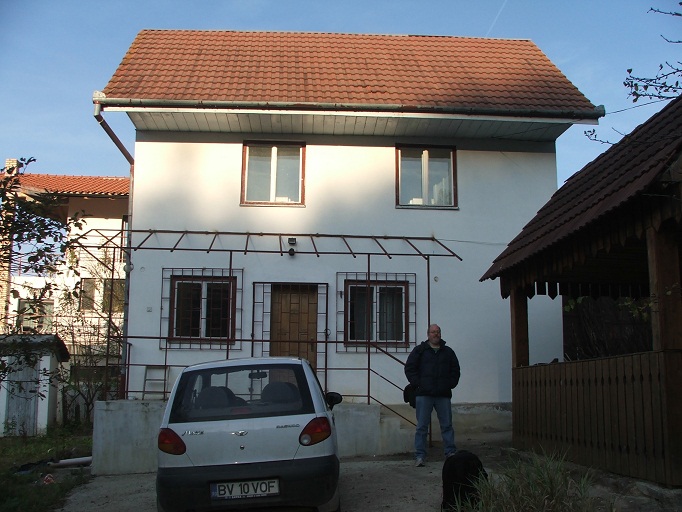 Many thanks to Simon who kindly hosted me in his house in a forest (reminds me of home). 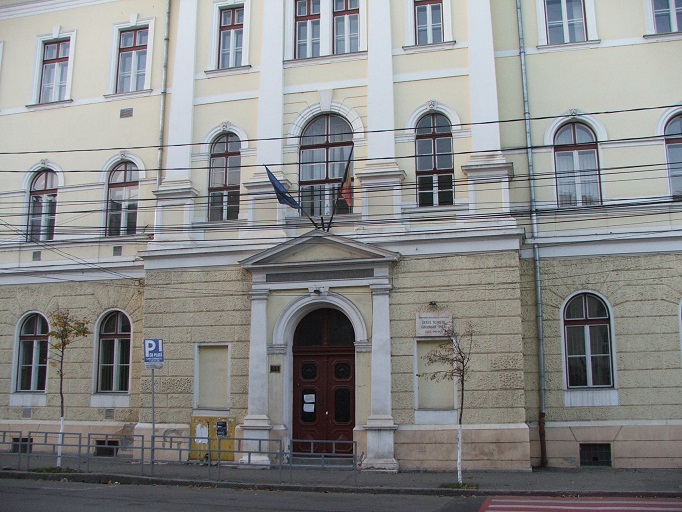 Lovely place, and there are rumblings of a return to Romania in the not too distant future... get this - I have to say it again, it's such an important piece of news - according to colleagues in Cluj, the Romanian government is debating a law which will grant schools permission nationally to introduce the IB programme in Romania. 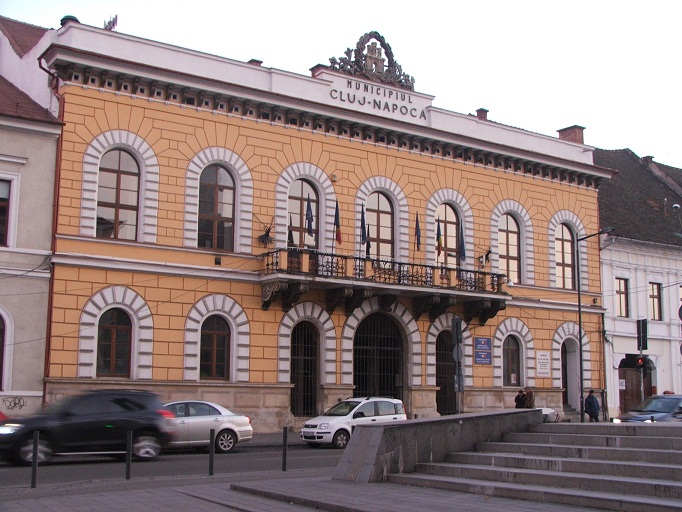 Something to watch out for! 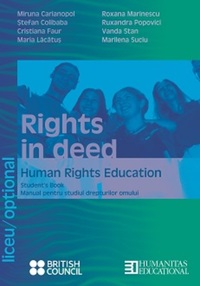 Rights in Deed is a book written for Human Rights through English, and there is a follow up which focuses on Citizenship.
Both are available here 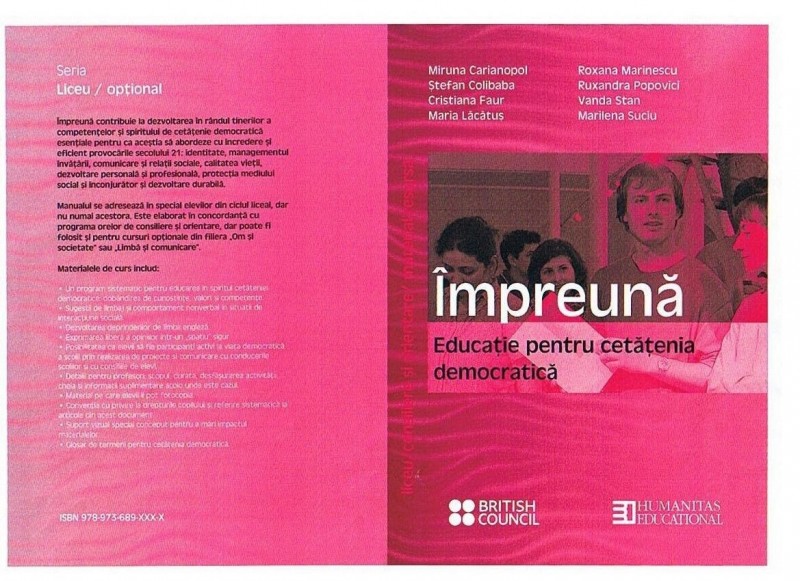